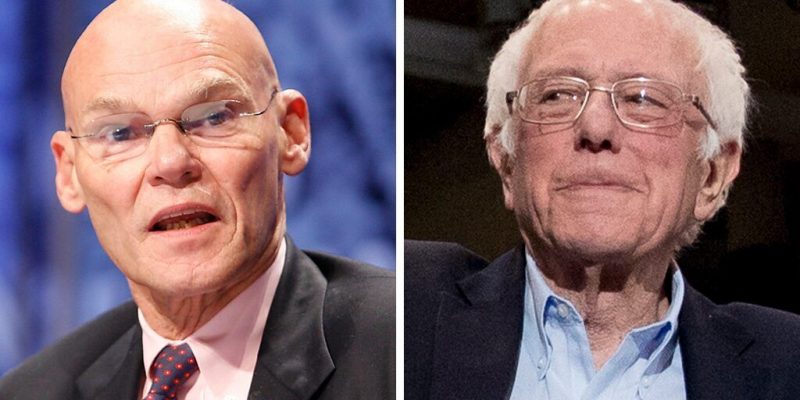 Democrat strategist and political commentator James Carville last week aired his grievances against Bernie Sanders and his supporters, invoking a response from the Senator and 2020 presidential candidate.

The feud began over the weekend after Carville told MSNBC’s Joe Scarborough,

“I am scared to death… [people] are not interested in socialism or the revolution… I’m afraid that Donald Trump is going to be re-elected… I’m not about a revolution, I’m not an ideologue. There’s a certain part of the Democratic Party that wants us to be a cult, I’m not interested in being in a cult. I’m 75 years old, I’m just not a very cult-y person!”

“We just had an election in 2018. We did great. We talked about everything we needed to talk about and we won. And now it’s like we’re losing our damn minds. Someone’s got to step their game up here.”

When asked by CNN’s Anderson Cooper for his response Sanders said,

“Look, James, in all due respect, is a political hack who said very terrible things when he was working for Clinton who was running against Barack Obama, I think he said some of the same things.”

Carville welcomed the label and called Sanders a “communist” saying,

“Last night on CNN, Bernie Sanders called me a political hack. That’s exactly who the f*** I am! I am a political hack! I am not an ideologue. I am not a purist. He thinks it’s a pejorative. I kinda like it! At least I’m not a communist.”

The verbal altercation is just the latest example of the growing civil war within the Democrat Party as self-proclaimed “democratic socialists” attempt to wrestle power from the more moderate establishment wing of the Party.

With Joe Biden’s candidacy in near free-fall, Bernie Sanders stands alone as the front-runner but billionaire Mike Bloomberg may just be able to spend enough money to change that. We will find out March 3rd when 14 states will hold their party primaries on “Super Tuesday”.