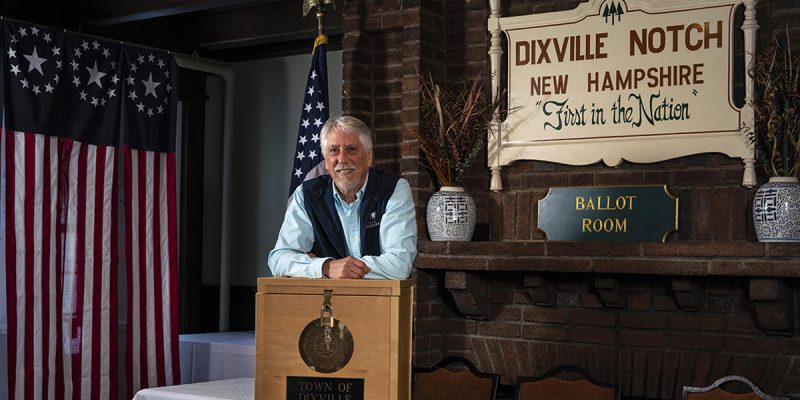 Twenty miles south of the Canadian border at a shuttered historic resort located in Dixville Notch, the first ballots in New Hampshire’s First in the Nation Presidential Primary (which is not, repeat NOT a caucus) were cast, tabulated, and promulgated.

With the closure of the Balsams resort complex, Dixville Notch’s status was in jeopardy of being lost to a technicality in New Hampshire law. However, the developer who is trying to renovate and bring the Balsams back to life moved on to the campus and saved the traditional vote.

With five voters on the rolls and present (one Republican and four unaffiliated that are permitted to participate in any party primary) the entire electorate deposited their paper ballots are midnight and the results were surprising.

The four unaffiliated voters all opted to participate in the Democratic primary with only the lone registered Republican casting a vote within the primary.

Though he is not taking part in the New Hampshire primary, billionaire Mike Bloomberg received two write in votes on the Democratic side and the lone Republican followed suit.

President Trump got shut out.

Whether this was a sincere move by Dixville Notch voters or the leveraging of their media attention to advocate for someone is undetermined, though don’t be surprised if you hear negative chatter about the move.

UPDATE: And here it is…

Several major news outlets are reporting that Mike Bloomberg won the New Hampshire Democratic primary in Dixville Notch, by getting two write-in votes. This allowed him to beat out Pete Buttigieg and Bernie Sanders, who got one vote each. But it turns out Bloomberg also won the New Hampshire Republican primary in Dixville Notch by getting one write-in vote, while Donald Trump got zero votes.

That means – and this is somehow real – Mike Bloomberg somehow won the Democratic and Republican primary vote in Dixville Notch. Donald Trump, who was running unopposed in the Republican primary, somehow lost.