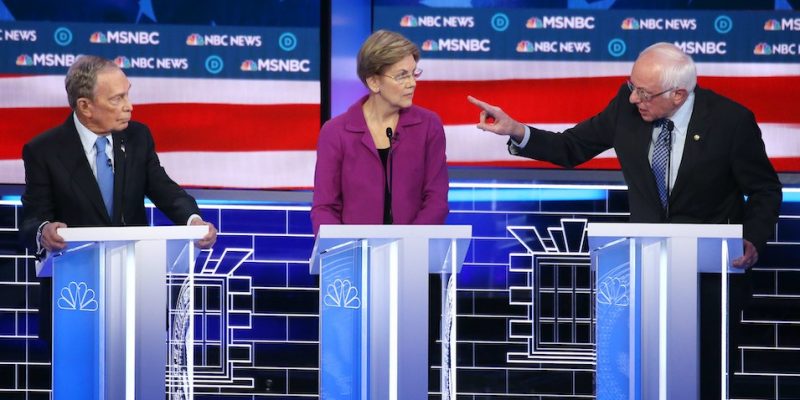 Last night’s televised Democrat Debate was quite the show as the remaining candidates did not hold back, clobbering each other for everything from socialism to non-disclosure agreements.

It was latecomer Michael Bloomberg’s first debate appearance which comes as the billionaire spends hundreds of millions of dollars on advertising in the fourteen “Super Tuesday” states.

The on-stage fighting between Sanders & Bloomberg and Buttigieg & Klobuchar often left the other candidates painfully awaiting their turn.

“We’re not gonna throw out capitalism, we tried that, other countries tried that, it was called communism and it just didn’t work.”

“What a wonderful country we have- the best-known socialist in the country happens to be a millionaire with three homes, what did I miss here?”

Elizabeth Warren was on the attack as well, slamming Bloomberg’s wealth & character,

“I want to talk about who we’re running against- a billionaire who calls women fat broads and horse-faced lesbians and no, I’m not talking about Donald Trump – I’m talking about Mayor Bloomberg.”

At the same time, President Trump held a MAGA Rally in the battleground state of Arizona. Afterward, Trump took to his usual method of airing grievances by labeling the Democrats as un-American posting,

“Mini Mike Bloomberg’s debate performance tonight was perhaps the worst in the history of debates, and there have been some really bad ones. He was stumbling, bumbling and grossly incompetent. If this doesn’t knock him out of the race, nothing will. Not so easy to do what I did!”

ALEXANDER: My Webinar Class On The U.S. Constitution Starts Sunday!

"The two biggest news stories in the country are Coronavirus and race relations. No news source reports the relevant death counts of either one in a form that would be useful to citizens. The press is no longer pretending to inform. It is straight propaganda." — Scott Adams
More Quotes