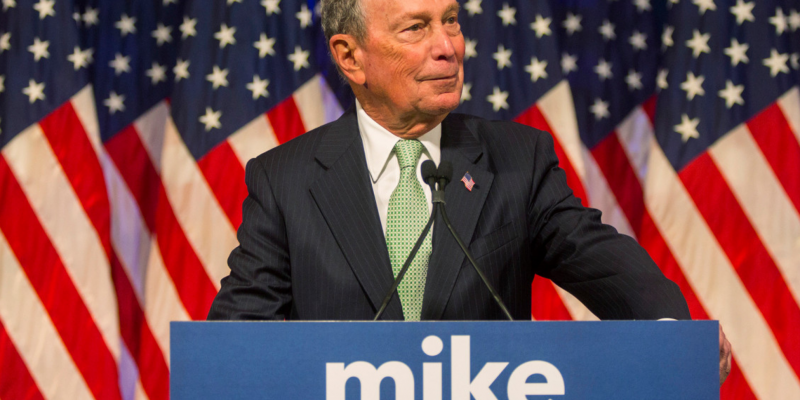 The Michael Bloomberg-funded initiative to turn Texas into New York, from Red to Blue, includes getting as many Democrats as possible elected into Congress, according to a memo of its plan shared exclusively with Hearst Newspapers.

It also includes an “unprecedented financial and grassroots effort” to flip the Texas House, according to Everytown for Gun Safety’s political director Chris Carr. The Michael Bloomberg-funded group says it is determined to expand background checks and red flag laws in the state.

“Michael Bloomberg, and groups directly tied to the billionaire presidential candidate, funded one in five Northern Virginia Democrats during the 2019 race for the House of Delegates,” according to a WUSA9 analysis of records provided by the Virginia Public Access Project. In 2019, the Virginia Legislature was flipped to a Democratic majority for the first time since 1995.

Of all the Democratic candidates, Bloomberg has the largest campaign operation in Virginia, WUSA9 reports, with seven offices and more than 80 staffers. Everytown outspent the National Rifle Association by roughly 8-to-1 in Virginia, according to CNN. After newly elected legislators sought to introduce sweeping gun control legislation and lost by a narrow margin, the state Senate advanced a slew of gun control bills.

The same campaign approach is being used in Texas, with Bloomberg opening more than 17 offices and hiring 150 Texas campaign staffers in January alone.

“We believe that Texas, as it becomes younger and increasingly diverse, can be the next emerging battleground state with gun safety as the tipping point,” Carr wrote in the memo, the Houston Chronicle reports. “We believe there are opportunities to elect gun sense candidates up and down the ballot, from the statehouse to the U.S. Congress – and potentially even statewide.”

The group is also coordinating its efforts with Mom’s Demand Action for Gun Sense in America, a gun control activist group, which claims it has 400,000 volunteers on the ground in Texas.

Mike Cox, the legislative director for the state affiliate of the National Rifle Association, said, “The Texas State Rifle Association will continue fighting to ensure that Bloomberg doesn’t buy Texas the way he’s trying to buy the Democratic nomination for president.”

The state association, which has served Texans since 1919, sent an email to its supporters saying, “Though gun control advocates and gun-grabbing politicians failed to lay down a marker in this particular contest, the amount of resources they invested in this race demonstrates their commitment to turn Texas ‘blue’ and make the Lone Star State their next target after Virginia for passing radical restrictions on our rights.”

It has also published a voter guide on its website and on social media outlets.

Everytown is targeting Texas with ads aimed specifically at suburban women, and digital ads specifically targeting black and Asian voters, according to the Houston Chronicle. It has targeted more than 20 Republican House districts including newly elected and popular Houstonian, Rep. Dan Crenshaw, a former Navy SEAL.

The governor’s office and Crenshaw’s office did not respond to requests for comment.

Texas is one of only six states that prohibits openly carrying a handgun. No permits are required to legally purchase a rifle, shotgun, ammunition, or any firearm component in the state, and state law does not require a license to possess them. Purchasers must be a resident of the state and at least 18 years old. The carrying of a concealed handgun is allowed with the appropriate permit.

No one convicted of a felony or a Class A misdemeanor can legally purchase or possess a firearm in the state.

“Anti-gun organizations are backed by distant billionaires, not local interests,” Jason Ouimet, head of the NRA’s Institute for Legislative Action, said in a statement. “These elitists funnel money into our communities to prop-up weak candidates defined by one trait: their willingness to bow to the billionaire’s gun control agenda, even if it turns great places-like Virginia-into New York City.”