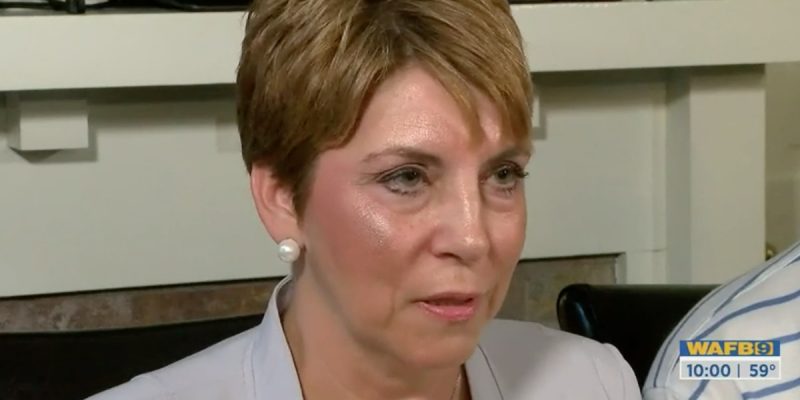 UPDATE: Well, you can toss everything below this, because Judge LeBlanc chose to become Ex-Judge LeBlanc today…

It comes after mounting pressure from people in Louisiana, across the nation and the world.

We’re all better off for this, for reasons the post below will explain.

ORIGINAL POST: To some extent we can sympathize with Jessie LeBlanc, the Ascension Parish district court judge whose name has become mud around the state after text messages were exposed in which she liberally threw around the “N-word” to describe a woman who was a competitor for the affections of a man she was cheating with. The whole thing has a woman-scorned feel to it, and we all know that matters of the heart can make people do awful, stupid, ill-considered things for which they’ll always be regretful.

In case you’re not familiar with this story…

A white judge in Louisiana has admitted using racial slurs in text messages, prompting calls for her immediate resignation.

District Judge Jessie LeBlanc admitted in an interview Sunday that she used the N-word in three instances while texting Assumption Parish Chief Deputy Bruce Prejean in reference to both a black sheriff’s deputy and a law clerk as her extramarital affair with the lawman ended.

“I admit that I used that word,” LeBlanc told WAFB. “I profusely apologize for that. I should have never said it. It was uncalled for. I was angry. I was upset. But, it’s no excuse.”

LeBlanc, who took office in 2012, stammered when asked if she had ever previously used the slur, but denied doing so while admitting to using it during a “moment of heated exchange” between her and Prejean that she never thought would become public.

Prejean was demoted from his role as chief deputy by Assumption Parish Sheriff Leland Falcon after he admitted to the affair last year, WAFB reports.

Like we said, to an extent we can sympathize. But only to an extent, and not a very far extent, either.

The “N-word” text messages were only a symptom of the real problem here, which is a judge engaging in an extramarital affair with a law enforcement officer. That’s a level of fraternization which can’t be discouraged strongly enough for what it does to the credibility of the legal system. It doesn’t help that she’s married with three kids and cavorting like that. Judges are supposed to be better than average people, and this tawdry episode exposes LeBlanc as well short of that standard.

And then you throw the “N-word” business in, and at this point there is no credibility left for Jessie LeBlanc at all. Every ruling she’s ever made involving a black criminal defendant is going to have to be reviewed, which could end up wasting hundreds of thousands, if not millions, of dollars in appeals, retrials and every other kind of legal proceeding imaginable. The mess she’s made by first taking up with a cop for an extramarital affair and then going full racist on the record with hateful characterizations of the next woman he’d moved on to is about as large as a judge in a small town can make.

She ought to resign. John Bel Edwards demanded she resign, which was a slick political move seeing as though LeBlanc was elected as a Republican. He calls attention to her as a racist and then he taints the whole GOP as racists just in time for the legislative session. It’s the kind of thing Edwards does.

LeBlanc ought to resign, but if she hasn’t resigned yet she probably won’t. She’ll try to ride out the storm and see what happens. And she hired Jill Craft, who is more or less the Gloria Allred of Louisiana, to represent her – which is an indication she’s going to fight this and probably make it as ugly as possible.

If she doesn’t resign, the state legislature can get rid of her. Article X of the Louisiana Constitution reads, in pertinent part…

§24. Impeachment
Section 24.(A) Persons Liable. A state or district official, whether elected or appointed, shall be liable to impeachment for commission or conviction, during his term of office of a felony or for malfeasance or gross misconduct while in such office.
(B) Procedure. Impeachment shall be by the House of Representatives and trial by the Senate, with senators under oath or affirmation for the trial. The concurrence of two-thirds of the elected senators shall be necessary to convict. The Senate may try an impeachment whether or not the House is in session and may adjourn when it deems proper. Conviction upon impeachment shall result in immediate removal from office. Nothing herein shall prevent other action, prosecution, or punishment authorized by law.

All you need is 53 votes out of 105 in the House to bring the impeachment, and then you need 26 votes out of 39 in the Senate to remove her.

She’s up for re-election this November anyway, as we understand it, and it’s hard to imagine she’d win re-election even if she ran. So this is an easy thing.

But an impeachment might well be a bargaining chip the Republican leadership in the House and Senate could dangle in front of either the Legislative Black Caucus or other non-Republican members of the legislature in order to pull a couple of House votes their way on a legislative priority or two. Remember, Republicans have a supermajority in the Senate and they’re only two votes short of one in the House, and what that means is if the whole GOP delegation gets behind something, they only need a couple of more votes in the House to have a veto-proof majority on a bill.

We already know that Edwards won’t veto a bill if it passes with enough votes to override him. He proved that last year with the pre-existing conditions bill; he screamed and yelled about it, then it passed with huge margins in both houses, so he signed it and then brazenly took credit for it when he ran for re-election.

So if an impeachment and removal of the inappropriate and racist judge Jessie LeBlanc can be traded for a few Democrat votes on some conservative priorities in the coming legislative session, it’s a nice piece of opportunism and bipartisanship all rolled into one.

Who knows? Maybe one day soon we’ll have Jessie LeBlanc to thank for lower car insurance rates after her impeachment gets traded for enough votes to pass tort reform over Edwards’ objection. She might end up making a contribution beyond humiliating headlines after all.