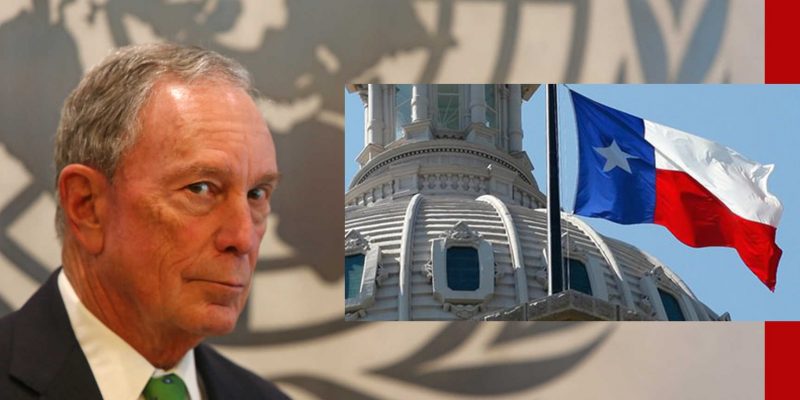 Gun control advocates bankrolled by Mike Bloomberg now have Texas in the cross hairs after Democrats swept into power in Virginia, hoping to flip the Lone Star State blue.

According to a report from the Houston Chronicle based on a memo shared with Hearst Newspapers, Everytown for Gun Safety announced it will spend three times what it spent in Virginia — around $8 million — supporting candidates and buying ads.

One of the affiliated groups with Everytown, Moms Demand Action, are boasting around 400,000 activists in Texas alone — though just how active they are is anyone’s guess.

Everytown plans to spend money in Arizona, Colorado, Florida and Georgia, as well.

The testimony, both invited and public, was “overwhelmingly in favor of our God-given liberties,” according to Rachel Malone, the director of the Texas branch of Gun Owners of America.

From the hip: Texas in particular is going to be a tough hurdle for Everytown. While Virginia is now solidly in Democratic hands, an ambitious “assault weapons” ban failed to pass the state Senate recently.

Texas won’t be any friendlier to their efforts as Republicans are expected to hold on both chambers and the governor’s office — though all it would take to flip the House would be nine additional Democrats. Even then, would all House Democrats support a radical gun control legislative agenda? That is unlikely considering many Texas Democrats hail from the border area where rural lifestyles and the continual specter of violence requires familiarity with firearms that can pack a punch. In other words, the Democrat districts may be deep blue but they may not cotton to all forms of gun control.

Then there’s the geography of the Texas Capitol. The Senate State Affairs committee, now chaired by the strongly pro-Second Amendment Sen. Bryan Hughes, spent hours on Wednesday hearing testimony from a diverse group of activists from various parts of Texas who are adamant at stopping even as much as “red flag” legislation from passing, let alone bans on AR-15s.

Invited testimony on the panel came from two Department of Public Safety division chiefs and Dr. Derek Cohen, director of the Center for Effective Justice and Right on Crime with the conservative Texas Public Policy Foundation (TPPF).

Earlier that morning, TPPF hosted a talk titled “Gun Policy in Texas: What Will or Will Not Make Us Safer?” The talk featured Dr. John R. Lott Jr., author and Founder of the Crime Prevention Research Center, moderated by Cohen. Watch the video below.

If that’s the landscape of the Texas Senate, then Everytown is looking at another defeat. At least on a policy level.

Let’s look at the long-term strategy. According to reports of the memo (we could not find a copy by time of publication), the group is supporting around two-dozen legislators in the 2020 election cycle. The goal here may be to build a lasting presence in Texas legislative politics, not so much a quixotic effort to flip Texas in 2020. We will be interested in seeing how much cash is given to candidates once campaign finance reports roll in.

There’s also the matter of Bloomberg’s presidency. The former New York City mayor has famously skipped the first primary states in order to focus on South Carolina and Super Tuesday, March 3. Texas has become a prize for national Dems in recent years, and the Bloomberg campaign must finish well in Texas and the other Super Tuesday states or face a longer road ahead.

Interested in more news from Texas? We've got you covered! See More Texas News
Previous Article It Would Be A Nice Bipartisan Move To Impeach Jessie LeBlanc (UPDATE: She’s Gone)
Next Article We Love Kennedy, But We Don’t Love His 5G Stuff