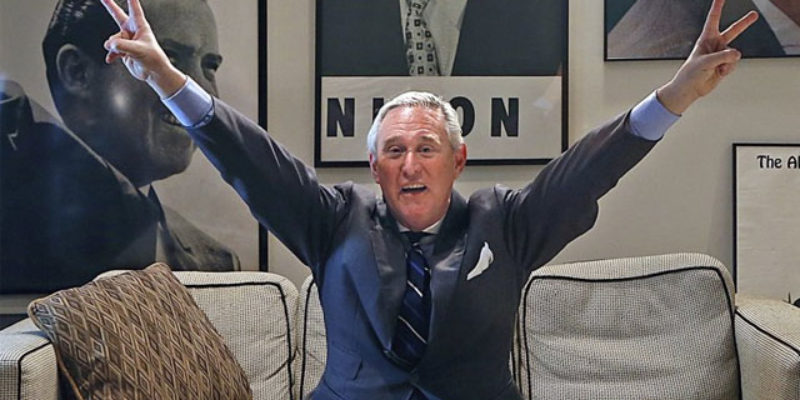 Last week was dominated by the questions regarding the sentencing of political operative Roger Stone. Last January, he was subjected to a pre-dawn raid by federal officials carrying assault rifles. Somehow, CNN was informed about the raid and their cameras captured the dramatic footage of agents entering his home and arresting Stone. The former advisor to Presidents Nixon, Reagan and Trump was eventually charged and convicted of making false statements, obstruction of an official proceeding and witness tampering.

The foreman of the jury that convicted Stone was Tomeka Hart, who revealed herself this week with public statements about the case. Hart is a former Democratic Party congressional candidate who made online comments that were critical of both Stone and President Donald Trump. She tweeted about Trump with the hashtag “klanpresident,” shouted “shame, shame shame” outside one of his hotels during a protest and referred to Stone and other supporters of the President as “racists and Putin cronies,” according to George Washington University law professor Jonathan Turley. In his view, there is a “serious question as to whether the conviction itself” of Roger Stone “should be reevaluated.”

It was also discovered that another juror was married to an official of the Department of Justice (DOJ) who worked in a division that spearheaded the Stone arrest, while a third juror, Seth Cousins, had made donations to Beto O’Rourke, a Democratic Party candidate for President, along with other left wing organizations. With such incredible bias on the jury, Stone had no chance of receiving a fair trial. It is no surprise that his attorneys have asked for a new trial in a secret court filing according to Chuck Ross of The Daily Caller.

The DOJ initially recommended that Stone receive a jail sentence of between seven and nine years in prison. These guidelines were blasted by President Donald Trump who called them “a disgrace.” Of course, convicting Stone was part of the discredited Mueller investigation. Stone was never involved in Russian collusion and had no conversations with any individuals associated with Wikileaks.

As President Trump noted, Stone was being prosecuted for “something nobody can even define.” He lied about conversations with a liberal talk show host, supposedly threatened his dog and engaged in other peripheral activities that had no bearing on the original purpose of the Mueller investigation.

Fortunately, United States Attorney General Bill Barr revised the sentencing guidelines to a more reasonable length of between three and four years. Nevertheless, the fact that Stone was prosecuted is an outrage. He is also under a gag order by the judge, denying him his First Amendment rights of free speech.

In contrast to the harsh treatment received by Stone and other Trump associates like Lt. General Michael Flynn and Paul Manafort, the denizens of the deep state never receive any consequences for their behavior.

For example, former Deputy Director of the FBI, Andrew McCabe, no longer must worry about being prosecuted. On Friday, a questionable decision was made not to issue any charges and drop the investigation into McCabe, who was the subject of a criminal referral by DOJ Inspector General Michael Horowitz.

This decision was made even though Horowitz identified multiple instances of McCabe lying about leaking information to the Wall Street Journal. According to Horowitz, McCabe disclosed “the existence of an ongoing investigation,” which violated both FBI and DOJ policy.

After his activities were uncovered, McCabe was initially demoted and eventually fired from his FBI position. Thereafter, he filed a lawsuit against the DOJ alleging that his firing was “politically motivated.”

The official statement clearing McCabe was made by J.P. Cooney, chief of the Department of Justice’s Fraud and Public Corruption Section and Assistant United States Attorney Molly Gaston. In the letter sent to McCabe’s attorneys, Cooney and Gaston state that “the Government has decided not to pursue criminal charges against your client…. Based on the totality of the circumstances and all of the information known to the Government at this time, we consider the matter closed.”

The exoneration of McCabe is another victory for those involved in plotting the political coup to overturn the results of the 2016 election and remove President Trump from office. McCabe was at the forefront of the FBI’s effort to investigate the Trump campaign and thereafter his administration.

McCabe joins Hillary Clinton and many other political enemies of President Trump who have been exonerated, even though they have been accused of committing serious crimes.

It leads many Trump supporters to openly question the fairness and integrity of the DOJ and to contend that there is a definite double standard of justice in our country.