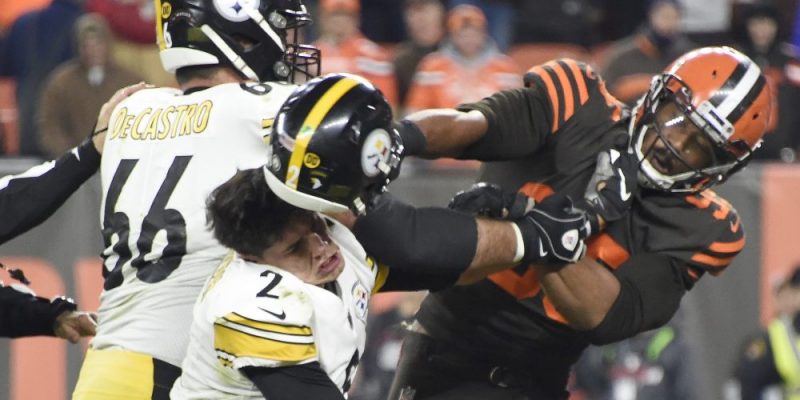 Cleveland Browns defensive end Myles Garrett was reinstated this week by the NFL after an indefinite suspension for using Mason Rudolph’s own helmet as a weapon against him.

Garrett, of course, ripped off the quarterback’s helmet during an ugly brawl in a game between the Browns and Steelers, and hammered down on Rudolph’s head with it. Video evidence does show that Rudolph reached for Garrett’s helmet first.

Apparently, however, he does not want to let this story die. Once again, just as he did a week after “apologizing” for the incident, he doubled down on his assertion that Rudolph uttered a racial slur against him.

Garrett was not this specific in his initial accusation back in November.

And yet still, after all this time, no audio evidence has been produced to corroborate Garrett’s claim. No player in that entire conflict has stepped forward to confirm it either.

Myles Garrett sat down with @minakimes to discuss the Week 11 incident that led to his suspension.

He again alleged Mason Rudolph of using a racial slur prior to the brawl. pic.twitter.com/8FUKDbKIg4

Rudolph saw Garrett’s interview with ESPN on Twitter. His response was quick and blunt:

I did not, have not, and would not utter a racial-slur.

This is a disgusting and reckless attempt to assassinate my character. https://t.co/mZcEcC0tCl

In not allowing this story to die, in not appreciating how stunningly short his suspension was for such an egregious offense, Garrett is once again indicating that he is not in fact sorry for his role in the incident. It is the “yeah but” apology no one wants to hear, no one chooses to believe.

Especially when there is zero evidence, not even the support of his teammates, that indicate he is telling the truth.

Continuing to go after Rudolph’s character is also going beyond virtue. Though extremely unlikely, according to Sports Illustrated’s legal expert Michael McCann, there is a small chance that this could become a legal issue for Garrett.

It is likely that this conflict between Rudolph and Garrett will never be resolved. Any time the issue of race is involved in any American story, you’ll have your camp believing one or the other based solely on the person’s skin color. Personally, I have, for two articles now, looked for the evidence. And the only evidence that consistently comes up is what I and the entire nation saw that ugly Thursday night in November.

I think it is the obvious nature of the video, the sight of it, that has pushed Garrett onto the defensive. He knows he was wrong, and he is seeking company in his guilt, in his misery, in the dark shadow that has been cast on him. Both Rudolph and Garrett will forever be linked in a saga where both men will spend the rest of their careers trying to prove their character. And while Rudolph took his share of the blame in November, if he in fact never said what Garrett is accusing him of, it is a shame, because this shadow will follow him for the rest of his life.