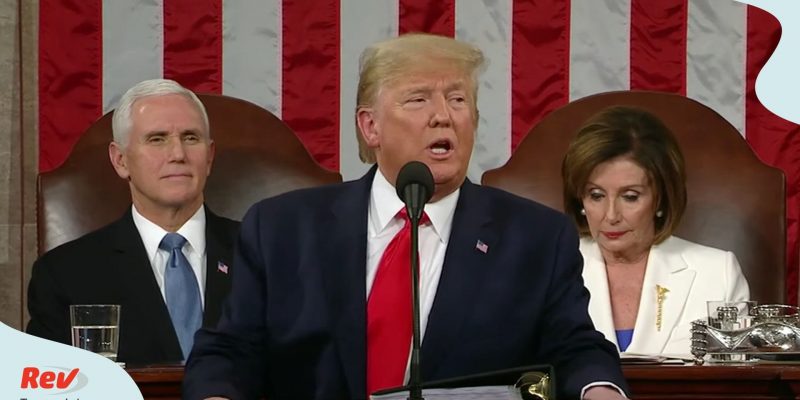 President Trump addressed a joint session of Congress last night for his third State of the Union Address where he declared, “The state of our Union is stronger than ever before.”

The President began by saying,

“Three years ago we launched the great American comeback. Tonight I stand before you to share the incredible results. Jobs are booming. Incomes are soaring. Poverty is plummeting. Crime is falling. Confidence is surging. And our country is thriving and highly respected again.”

“We are rebuilding our country,” The President added.

“Rush Limbaugh, thank you for your decades of devotion to our country… in recognition of all you have done for our nation… I am proud to announce tonight you will be receiving our country’s highest civilian honor, the Presidential Medal of Freedom.”

The First Lady then pinned the medal on a teary-eyed Rush right then and there.

The President took a couple of “punches” at Democrat lawmakers saying,

“132 lawmakers in this room have endorsed legislation to impose a socialist takeover of our healthcare system, wiping out the health insurance plans of 180 million very happy Americans. To those watching at home tonight, I want you to know: We will never let socialism destroy American health care.”

President Trump reiterated his dedication to the border wall,

“This will be a tremendous boon to our already strongly guarded southern border, where, as we speak, a long, tall, and powerful wall is being built.”

The President called for Congress to pass a ban on late-term abortions adding,

“Whether we are Republican, Democrat, or independent, surely we must all agree that every human life is a sacred gift from God…”

Another powerful moment came when President Trump recognized the parents of Kayla Mueller who was kidnapped and murdered by slain ISIS leader Abu Bakr al-Baghdadi. He told the story of how the operation to execute the terrorist leader was named after her birthday adding, “They never forgot Kayla and neither will we.”

The President recognized the spouse and son of Army Staff Sgt. Christopher Hake who was killed in Iraq when his vehicle was hit by a roadside bomb that was provided by slain Iranian leader Qassem Soleimani.

President Trump declared, “Our message to terrorists is clear: You will never escape American justice. If you attack our citizens, you forfeit your life.”

Lastly, an emotional reunion took place when the President recognized the wife and young children of an American service member who just returned from Afghanistan.

The 45th President concluded his State of the Union saying,

“As the world bears witness tonight, America is a land of heroes. There’s a place where greatness is born, where destinies are forged and where legends come to life… The sun is still rising. God’s grace is still shining. My fellow Americans, the best is yet to come. Thank you. Thank you very much.”

Interested in more national news? We've got you covered! See More National News
Previous Article BAYHAM: The Democrats’ Iowa Debacle
Next Article This Won’t Be Much Of An Election, I Don’t Think…