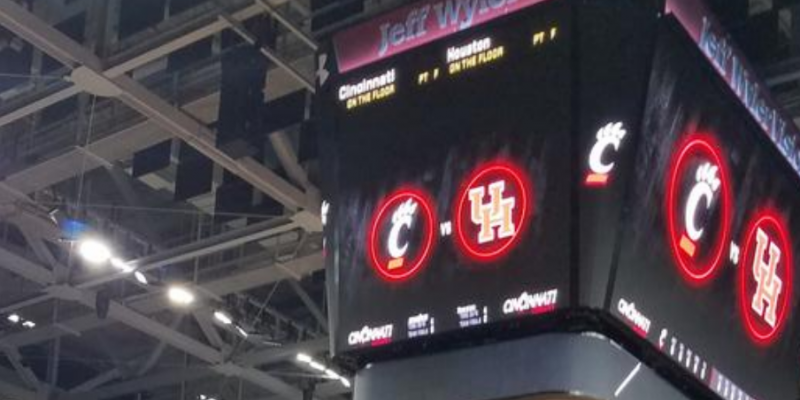 Houston guard DeJon Jarreau was only suspended for one game after it was captured on video that he bit Cincinnati’s Mamoudou Diarra’s left leg during Saturday’s game against Cincinnati.

It took one day for Coach Kelvin Sampson to make an announcement. On Sunday:

“After further reviews from multiple angles, it can clearly be seen that DeJon Jarreau bit Mamoudou Diarra,”Sampson said. “I reached out to Cincinnati Head Coach John Brannen this morning and apologized on behalf of our Basketball team. Our program is built on discipline, and behavior like that will not be tolerated.

“With that in mind, I have chosen to suspend DeJon for Thursday’s game against Tulane. I am confident DeJon will learn from this incident and the consequences of his actions.”

Officials fouled and ejected Jarreau from the game. The Houston Cougars beat the Cincinnati Bearcats 64–62.

In the video you can see Sampson ask Jarreau, “Did you bit somebody?”

And FWIW, here is video of Kelvin Sampson talking to an official, and then appearing to ask presumably Jarreau (off camera), “Did you bite somebody?” #Bearcats pic.twitter.com/aCHlNxfKnR

Interested in more news from Texas? We've got you covered! See More Texas News
Previous Article Plano, Arlington, Texas among most fiscally sound cities in U.S.; Houston, Fort Worth among worst
Next Article Don’t Forget To Grab Your Tickets For The Hayride’s Feb. 27 Covington Event!