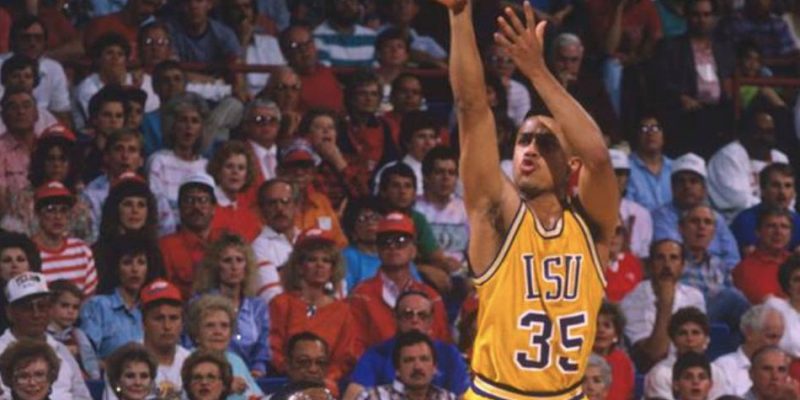 The last time it happened was in December 2000 when Shaquille O’Neal’s No. 33 went up into the rafters at the Maravich Assembly Center.

On Saturday, O’Neal’s former teammate’s No. 35 will become the sixth such number in Tiger history to go on permanent hiatus.

Mahmoud Abdul Rauf, formerly Chris Jackson when he played at LSU in 1988 and 1989, will be memorialized during halftime of the Texas A&M game.

Current LSU head coach Will Wade was six years old when Abdul Rauf played his first game as a Tiger.

“I pretty much tell [my players] he was Steph Curry before Steph Curry,” Wade said.  “That’s the best way you can describe it. We’ve seen video and that sort of thing but I mean to average 30 points as a freshman, it’s just incredible. It takes some freshmen the first month to score 48 points, and good freshmen too. He was just a tremendous, tremendous player.”

Personally, I was only 11 years old at the time. I remember the time I first saw Abdul Rauf on the television. I had been following his exploits, from his modest 12-point opener to his 48-point explosion in game three in a 111-109 loss to Louisiana Tech, but had not yet seen him on the tube. It would be when LSU played Florida on the road, when he was at the foul line, when I first caught a glimpse of the greatest college basketball player I personally had ever watched.

I watched him score 53 points that night and was instantly hooked.

He averaged 30.2 points per game that freshman season, still an NCAA record. The 5’11 guard from Gulf Port, Mississippi far surpassed his 13-point, seven-assist prediction he made for himself in his first interview with sports information director Kent Lowe.

It was after his 48-point night against Tech that things shifted in Abdul Rauf’s mind.

“At that moment it’s like ok, I think I can do this,” he said. “At the same time, you never truly know when you’ve arrived because anything can happen. I think that’s what kept me training hard in the basement gym because I was always expecting teams to change things up.”

In his two-year career at LSU, he scored 50+ points four times and 40+ points an additional 11 times. I remember well his game winning shot at the buzzer at home against Vanderbilt. I remember missing two of the all-time great LSU games on television–the improbable victory over No. 2 Georgetown in the Superdome, and what many call the most exciting game in Assembly Center history when Ricky Blanton’s three-pointer beat No. 18 UNLV.

I remember being such a “Chris Jackson” fan that I blinked my eyes and twitched my head like he did because he had Tourette’s Syndrome. I was just a dumb kid, not trying to make any fun. I just wanted to be Chris Jackson that much.

I remember my mom telling me after one of my games to stop doing that and I was mortified that anyone noticed. That little game was supposed to be just for me.

I remember hearing that he was such a perfectionist in everything, that he would constantly tie and retie his shoes until he felt it was perfect.

I remember reading the story that he was practicing by himself in the Assembly Center the night LSU’s football team beat Auburn in the Earthquake Game. According to the myth, Abdul Rauf was pretending to be involved in a game ending play, and he narrated to himself his game-winning jumper just as Tiger Stadium exploded from the effects of Hodson-to-Fuller.

There was a mythology to No. 35 in purple and gold. There were stories that transcended the basketball court. It is long overdue that LSU recognize that, that they honor one of the greatest players in not only Tiger history, but college basketball history as well.

“I enjoyed my teammates, enjoyed the campus life, but I didn’t go out a lot,” Abdul Rauf said. “Because for me, basketball was life or death. I didn’t see a future for myself academically, so I didn’t know if I was going to have a chance of being successful. I gotta give everything I had to this game and hope it works out.”

Abdul Rauf said he will certainly be emotional on Saturday.

“I’m still trying to process, and I know it’s going to hit me so I just hope it doesn’t hit me when I get on that court tomorrow.”

It’ll be good to see an old friend and hero on that court. He won’t be dressed in the iconic LSU jersey, but certainly Tiger fans old enough to remember will be flipping through the catalogue of memories when he did. It was when the Assembly Center truly was the Deaf Dome, an era in LSU basketball history that far transcended the typical excitement of the sport.