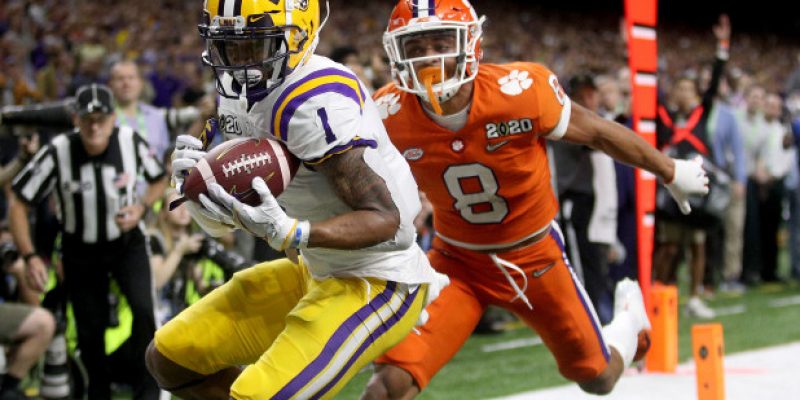 ESPN’s Louis Riddick has been studying film on cornerbacks in the NFL Draft. And time and time again, there is only one player who continues to stand out.

And the player isn’t even one of those cornerbacks.

Even with the depth of the wide receiver class in the upcoming 2020 NFL Draft, the most dynamic prospect may not even be eligible yet–

“He is so strong it’s ridiculous,” Riddick posted on Twitter. “And competitive. And has great hands. And great play speed.”

Keep watching corners in this 2020 NFL Draft that matched up with #LSU WR Ja’Marr Chase and keep coming to the same conclusion – CHASE is a grown a$$ man! He is so strong it’s ridiculous. And competitive. And has great hands. And great play speed.

Even some of those cornerbacks said as much.

Best WR that you have faced?

The 6’1 physical freak, still just 19 years old, won the 2019 Biletnikoff Award as the nation’s best receiver. In 15 games, he caught 84 passes for 1,780 yards and 20 touchdowns on one of the most explosive offenses in college football history.

After LSU’s championship-winning game against Clemson, ESPN’s Stephen A Smith, who had picked Clemson to win before the game, was in awe at Chase as well.

In the middle of his commentary on Tiger quarterback Joe Burrow’s performance, Smith derailed his train of thought suddenly to offer his “condolences” to Clemson cornerback AJ Terrell, a first-team All-ACC selection at cornerback, who got torched by Chase for nine catches and 221 yards for a 24.6 ypc average. Chase also scored two touchdowns.

“My Lord,” Smith said, “did he get scorched…I mean, that’s pretty damn bad.”

After a sluggish start for the LSU offense in that national championship game–two series, six plays, no first downs–Chase went to Burrow with a pivotal message.

“They’re giving me some space,” the receiver told his quarterback.

And the rest is history.

In 2020 it is unlikely that Chase will produce the numbers he put up this year with a new quarterback being groomed in Baton Rouge, but with fellow receiver Terrace Marshall and others ready to join the party in LSU’s explosive new offensive, don’t expect teams to be able to simply double team Chase to shut the Tigers down. Chase will dominate again, and when he does he will be right in the mix for the Biletnikoff Award yet again. Who knows, he might even get Heisman consideration as maybe he should have this past season.

One thing is for sure–NFL teams will be salivating over grabbing this superstar, who will not stop in torching cornerbacks even as a pro.


Interested in more news from Louisiana? We've got you covered! See More Louisiana News
Previous Article No. 35: LSU Legend to Have Number Retired at Halftime
Next Article PERRICONE: So Long, Chris Roberts