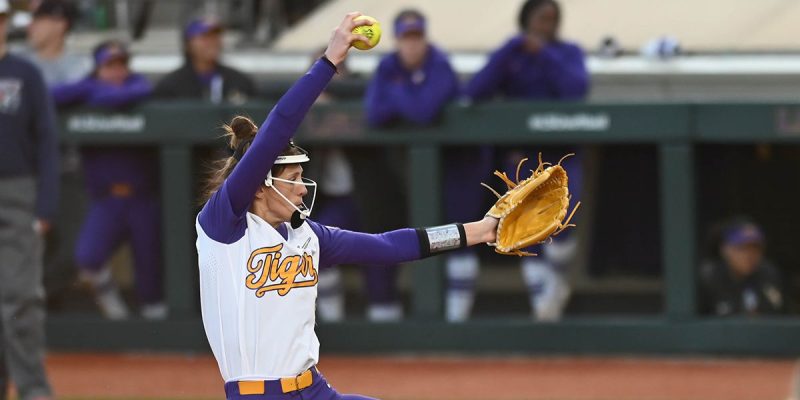 A day earlier, Ali Kilponen allowed just one hit and struck out six in a five-inning 8-0 LSU romp over Belmont.

With fewer runs to work with, Maribeth Gorsuch figured she’d take it a few steps further against the Bruins on Saturday.

The right-hander wearing No. 6 for the No. 6 Tigers didn’t look human Saturday night, facing 21 Bruins, setting down all 21 of them, and hurling 21 first-pitch strikes in the first seven-inning perfect game in LSU history.

The senior from Lewisville, Texas struck out 16 and walked none in throwing just 81 pitches.

“I was super focused and locked in,” Gorsuch said after the game. “I went at them. I had confidence and it comes from my teammates.

“I was trying to stick to my routine, keep my breathing consistent. I was worried about the batter, one pitch at a time. In the bullpen warming up I felt good, felt like I was on.”

Oh yeah, the Tiger batters did their part too in a 4-0 LSU victory at Tiger Park on the last day of the Purple and Gold Challenge, improving their record to 13-1. The other players didn’t do much else–even on the five non-strikeout outs Gorsuch induced, she fielded three of them.

Still, Gorsuch recognized that this victory was more than just about one magical outing.

“It’s amazing but I have to give all of the credit to my catcher, my teammates, and my coaches. Without their support none of this would be possible, we work hard day in and day out. The pitching staff was amazing this weekend, nothing beats the support from them.”

There have been five other perfect games in LSU history, but all were completed in five innings:

Head coach Beth Torino may have been happier for Gorsuch than the pitcher herself.

“It was special, it was a really awesome night for her,” said Torino, now in her ninth year in Baton Rouge. “She did some things that I’ve never seen in my entire career on a softball field tonight. Twenty-one first pitch strikes is unheard of. I don’t know if I have ever been a part of something like that.  As nervous as I was in seventh inning knowing what was on the line, I just kept calming myself down thinking about what no matter what happens it was a great night for her. She pitched as well as I have seen her.”

The No. 6 Tigers will be on the road next weekend, competing in the Judi Garman Classic in Fullerton, California. The Tigers face top competition in Loyola Marymount, Texas Tech, California, Washington and Colorado State.