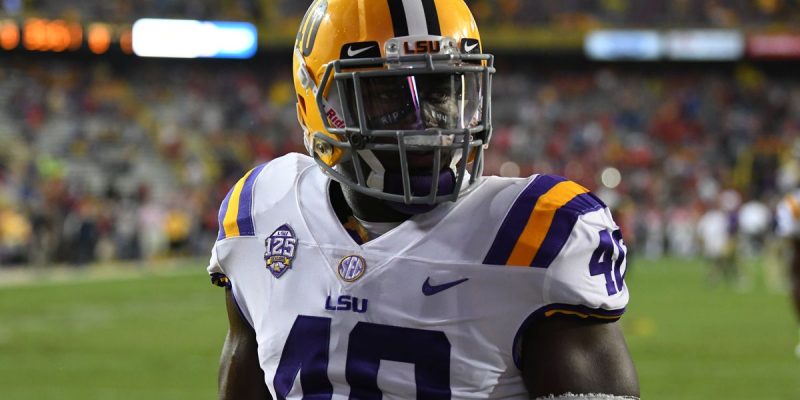 Devin White, arguably the greatest linebacker in LSU history, was torn on his decision last year to either return to school or enter the NFL draft.

He’d showed his love for LSU by playing in the Fiesta Bowl in an age when many players are choosing to forgo postseason competition in order to prepare for the NFL draft.

Back in December 2018, weeks before the bowl game, he said his choice to play and risk injury “wasn’t a tough decision at all.”

“Everybody thinks I’m going to the NFL,” White said. “But I’m really all the way in at LSU, and I haven’t even started making a decision yet. If I was to say I wasn’t playing [in the Fiesta Bowl], that means I’d made a decision.”

“But I haven’t even started making that decision with my family, because I want to finish the season and I want to end on a good note.”

After helping LSU top undefeated Central Florida, there was a side of White that wanted to come back to Baton Rouge for a shot at winning a national title, just as Clemson defensive stars Christian Wilkins, Clelin Ferrel, and Austin Ferrel had the spring before. Clemson would go 15-0 and win the championship the next season.

There was also a side of White that knew what the NFL offered.

As it turned out, White chose to capitalize on all the prognostications having him going early in the first round of the draft. A letter White wrote to LSU fans illustrated exactly how much love he felt for Louisiana’s flagship university.

LSU of course won the national championship a year later, in a stellar run being called the greatest single season in college football history.

Meanwhile, the All-American linebacker was the No. 5 pick of the Tampa Bay Buccaneers in the spring of 2019. After a dynamite rookie campaign, and just one day after LSU beat Clemson for the title, he was named to the Pro Football Writers of America All-Rookie Team. The 6’0, 237-pound wrecking ball finished his first season as a Buc with 91 total tackles, 2.5 sacks, three pass deflections, one interception, three forced fumbles, four fumble recoveries, and two fumble return touchdowns.

He did all of this while missing almost four games the first month of the season with a knee injury.

It is the kind of heart, hustle, and talent the Baton Rouge native exhibited when he was roaming the field in Tiger Stadium. And now the 2018 Butkus Award winner honoring the nation’s best linebacker will forever be linked to his favorite home.

At the time, the individual national award was the first for an LSU player since Odell Beckham Jr won the Paul Hornung Award in 2013. Of course in 2019, Joe Burrow, Grant Delpit, Ja’Marr Chase, Joe Brady, and Ed Orgeron swept through award after award in the most memorable campaign in Tiger history.

White is making millions of dollars and is happy with his decision, no doubt. But certainly there has to be a sense of “what if” nagging at him, especially in December and January as the Tigers ripped through three top-5 teams on their way to immortality. The man that bled purple and gold so passionately missed out on an opportunity to be a part of the greatest team of all time, and fans, at least, regret that for him.

But certainly his footprint had already been made on the LSU program.

Despite starting only two years at linebacker, White finished with 278 career tackles to go along with 29 tackles for loss and 8.5 sacks. The 133 tackles during his sophomore year were the fourth most in school history, and his four Defensive Player of the Week honors were the most in SEC history. He followed that up with a 123-tackle, consensus All-American campaign as a junior, when he earned the Butkus.

Devin White has earned LSU fans’ respect. He has always bled purple and gold, has always been proud of LSU. He has shown what a legendary name a player can make for himself by choosing Tiger Stadium as his home, and why it is so rewarding for a fan to watch a transcendent talent like his still play with such love and passion.