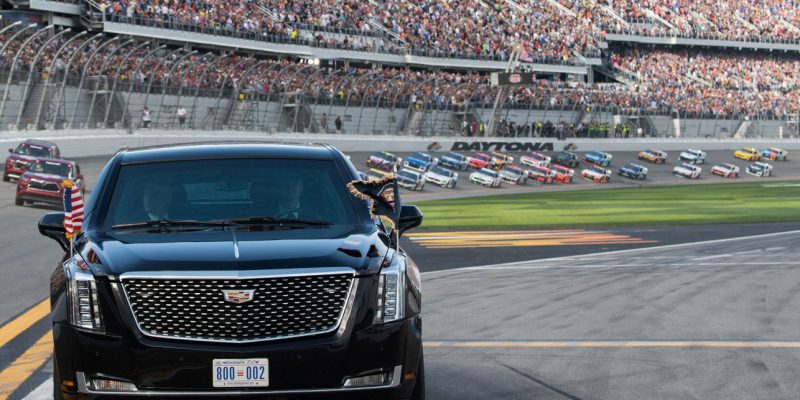 More than 100,000 NASCAR fans at the 62nd Daytona 500 were thrilled as President Trump became the second President to attend the event and the very first to serve as Grand Marshal for the race.

To kick off the excitement, Air Force One did an 800-foot fly-by of the Daytona International Speedway.

NASCAR commentators lamented the excitement of the President’s participation saying, “What an entrance by the President of the United States!.. This is just so special.”

President Trump was joined by First Lady Melania Trump as he delivered a brief, 4-minute speech before the race saying,

“The Daytona 500 is a legendary display of roaring engines, soaring spirits, and the American skill, speed, and power… But Nascar fans, never forget that no matter who wins the race, what matters most is God, family, and Country.”

As Grand Marshal, President Trump was entrusted with the responsibility of delivering the powerful instruction, “Gentlemen, start your engines!”

Afterward, the President and First Lady again made history by lapping the track in the Presidential limousine also known as “The Beast”.

President Trump then asked for an officials radio to before sending a message to all the drivers and crew telling them,

“Drivers- this is President Trump. It was an honor to open the Daytona 500. Have a phenomenal day, have a great race. God bless you, we love you.”

“The Great American Race” was watched by 23 million viewers and ended with a second consecutive victory for Denny Hamlin and his third overall.

Racer Ryan Newman experienced a crash at the very end of the race which sent him to the hospital. Also known as “Rocket Man”, Newman was in ICU but is expected to recover. President Trump immediately tweeted, “Praying for Ryan Newman, a great and brave @NASCAR driver!”

See some of the highlights from President Trump’s NASCAR fun below!