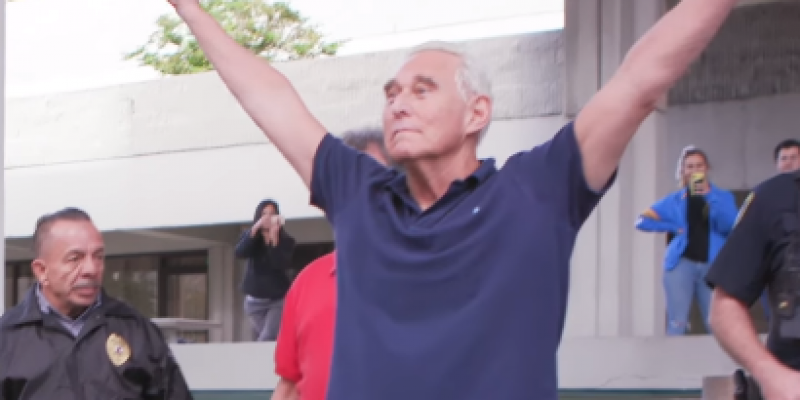 Did a famed Nixon “dirty trickster” and former Trump campaign adviser get religion?

It at least appears so, as famously flamboyant Roger Stone was sighted at a Franklin Graham Decision America stop in Florida and actively participating.

Given, Stone has been busy appealing to conservative groups of all stripes to raise funds for his legal defense. He could use all the help he can muster: Stone was recently convicted on seven counts, including witness tampering and lying to investigators, related to his work for the Donald Trump presidential campaign. His sentencing is scheduled for Feb. 20.

But according to Gateway Pundit via Central Florida Post, Stone’s newfound faith may have gone a little deeper than a casual alliance with Evangelical conservatives. Tampa Bay, Fla.-area minister Randy Coggins, who claims to serve as a spiritual adviser to Stone, said via Twitter he and Stone attended the rally where Stone apparently “publicly confessed his faith and belief in God.”

Coggins noted hundreds of attendees surrounded Stone to congratulate and encourage him as a new Christian. According to Evangelical Christian theology, the Bible teaches that a moment of penitent prayer (in which a person prays for complete forgiveness from sins in the name of Jesus Christ for the first time) is necessary for eternal life and spiritual growth. This is the message proclaimed by Graham and his late father, the Rev. Billy Graham.

Central Florida Post reported Stone was seen leaving the event with a Bible given to him by Graham’s ministry.

Previous reports have indicated Stone has been professing faith for more than a year. The Washington Times reported in November that another spiritual adviser to Stone turned him on to the Bible. In January 2019, Stone reportedly confessed faith in God as he answered media questions regarding his trial.

From the hip: Whether this is the predecessor to “jailhouse religion” or a genuine conversion, Jesus teaches “a tree is known by its fruit.”

As an aside, another Nixonian, President Richard Nixon‘s own hatchet-man Chuck Colson, found a lasting faith in Christ in the midst of legal troubles. In 1974, Colson was found guilty and indicted for his role in conspiring to cover up the Watergate burglaries. While facing arrest, Colson was given a copy of “Mere Christianity” by C.S. Lewis which spurred his decision to accept Christ, join a prayer group, and be ridiculed for it as a publicity stunt to reduce his sentence.

While in prison, Colson began a prison outreach that eventually became Prison Fellowship, a major voice for criminal justice reform. After serving time, his rights were reinstated by Gov. Jeb Bush in 2000. He died a prominent and respected Evangelical figure in 2012.

Sometimes jailhouse faith sticks. Other times it may be just another dirty trick. Time will tell.

Interested in more national news? We've got you covered! See More National News
Previous Article Pew quiz: ‘How much do you know about state debt?’ Findings might surprise you
Next Article REMEMBER THIS DAY: One Last Look at a Championship Month to Cherish