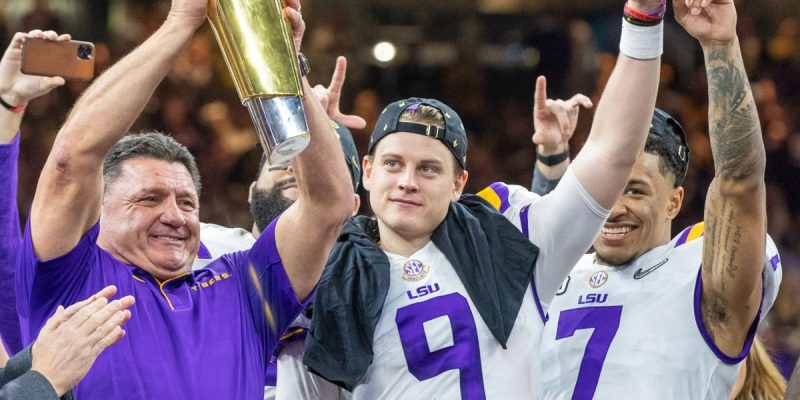 As the not-so-new-year-anymore enters February, it is time, before National Signing Day tomorrow, to press rewind to a span of days that LSU Tiger fans will cherish for the rest of their lives.

Oh what fun it was to ride.

The month-plus of December and the first half of January was a season unto itself, a Christmas-New Year celebration decked with other colors besides red and green.

As we all know, LSU topped three more top-4 teams to win the national championship. After the regular season ended with a demolition of Texas A&M, the No. 4 Georgia Bulldogs were next in Atlanta, the SEC East champion’s backyard. No matter. Burrow nailed any remaining Heisman question shut with a 349-yard passing day and magical scramble and 70-yard pass that will forever be remembered as one of the telling highlights of the 2019 season.

You may remember thinking that it would be nice to be able to enjoy the holiday season while looking forward to the Oklahoma game on December 28.

In the meantime, your Tiger fix was satiated with an onslaught of individual awards. Head coach Ed Orgeron, assistant coach Joe Brady, wide receiver Ja’Marr Chase, safety Grant Delpit, and of course quarterback Joe Burrow swept award after award, only adding to the legacy of the 2019 Tiger team.

Who could forget the speech Joe Burrow made the night he became only the second Heisman winner in LSU history?

The whole thing was surreal. As you watched LSU collect trophy after trophy, and as you listened to Burrow mention the poor in his hometown of Athens, Ohio and thank both LSU and Ohio State–the program that never saw him as quite good enough–you just knew.

You somehow knew that this season was destined to end the way it would.

The defending national champions were of course up next. It was powerful Clemson and their 29-game winning streak between you and championship glory.

With a win, Clemson would have claimed three of the last four national titles, and LSU would have been left scratching their head at a season and a destiny that could have been.

You may remember Clemson head coach Dabo Swinney doing everything he could to motivate his team.

And you may remember it working for awhile to the tune of 17-7.

It was all Clemson early, as the orange and purple Tigers played a field position game in the first quarter and frustrated the potent LSU offense.

You may remember wondering what was wrong with Joe Burrow.

You may remember thinking, after Clemson went up ten points, that this might be a long night.

But then the onslaught began….

It was then that your 2019 national champion LSU Tigers stood right up and roared.

And they proved how exactly unstoppable they were.

They proved that they were the greatest.

It is most certain, that no matter how time treats you, that you will always remember that.