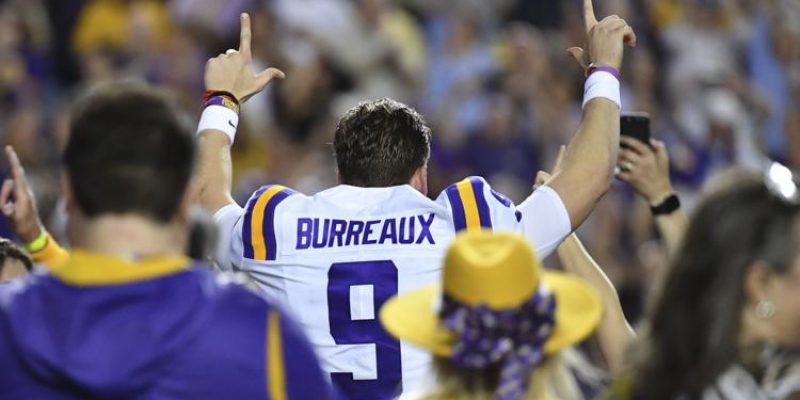 …You’ll remember Burrow becoming the frontrunner for the Heisman trophy after throwing for 393 yards on 31-of-39 passing, and rushing for an additional 64 tough yards.

You’ll remember his clutch third down conversions in the fourth quarter–both with his arm and his feet–every time Alabama had gained the momentum and the support of a raucous crowd.

…You’ll remember not being able to believe the 33-13 halftime score and still not trusting that it would be enough.

And you’ll remember being right.

After Auburn, the second smallest margin of victory all season.

It was a shocker to the nation for sure. But not to the Tigers, not to the players and coaches in that locker room.

How little did you know that never would the Tigers ever be seriously threatened late in a game ever again….

After Bama, everything was just about finishing the job and getting to Atlanta for the SEC Championship Game. As the saying goes, it was all downhill from there.

Of course lesser LSU teams in the past, when the program was at a different level, might have stubbed their toe against an Ole Miss or an Arkansas or a Texas A&M.

But this was 2019, and long gone were the ghosts of teams past who couldn’t sustain success from week to week, who couldn’t attain a high and avoid the proverbial plummet back down to Earth.

First up was Ole Miss, and the Tigers effectively silenced anyone who might have doubted their focus as they roared out to a 31-7 lead by halftime. Still, there were some concerns in the first half about the defense, and those concerns were proven legitimate in the second half when it played like it was still hung over from the celebratory, fame-inducing victory over Alabama the previous week.

The night was never more puzzling than the first half of the third quarter. On its first possession of the half, Ole Miss drove 75 yards in just two plays, the second coming on a 46-yard run by freshman quarterback John Rhys Plumlee. When the Rebels got the ball back after a Tiger field goal, it again took only two plays to drive 75 yards, with Plumlee slicing right through the middle of the Tiger defense for a 60-yard touchdown run.

Still, you’ll remember thinking how atrocious the defense was, but how truly unstoppable that offense was too. The final score was 58-37. LSU covered the spread with the 21-point victory, despite giving up 30 points in the second half. Would the national, or your, perception have been different had the final score been 38-17?

Despite the mental gymnastics you may have been doing to convince yourself that everything was fine, you knew, deep down, that this was not the recipe for a national championship. There needed to be more balance. You may have been picturing making it all the way to the playoffs for the first time, only to fall to a powerhouse team 54-51, or some ridiculous number like that, where both defenses were wholly absent from the scene.

15-0 and a national title trophy would never happen with the defense LSU fielded in Oxford.

But that’s the beauty of retrospect. Looking back now, you realize that the defense never was that bad. Ever again.

In fact, it became a strength that complimented the boys on the opposite side of the ball who would continue to put up historic numbers and shatter record after record.

Back at Tiger Stadium the next week, LSU was up 56-6 before Arkansas scored two late, meaningless touchdowns. The defense did its part.

Then it was payback for 2018’s rob-job in College Station.

Anyone who saw the 2018 game in College Station knew that both head coach Ed Orgeron and his team were not simply going “to let that thing go,” as he’d said in a press conference earlier that week. Because mere moments later he’d say, “We just felt helpless and then we just felt that when our time comes we’re going to do something about it, and now’s the time.”

Human nature made this one clear to you: LSU would do something about it. The Tigers would be out to break the lights on the stadium scoreboard. Final score that Saturday night in Death Valley: 50-7.

What an offensive explosion. What a defensive lockdown. It was the complete game the playoff committee had been seeking, apparently, even after the destruction of Arkansas.

Game domination aside, you will likely remember this one for more than just the total beatdown of Aggie. Hopefully you’ll remember what hardly anyone ever remembers–senior night at Tiger Stadium, when your future Heisman Trophy winner surprised and delighted the fans with a certain Louisiana something for their Saturday night enjoyment.

It was the night Joe Burrow officially became Joe Burreaux, one of our own, a Louisiana boy for life….