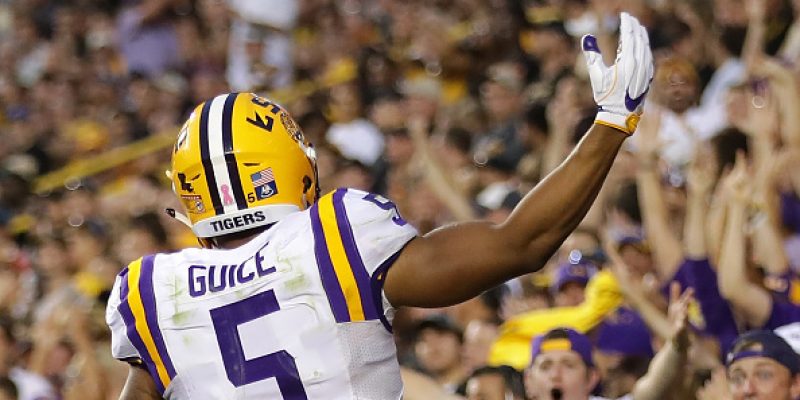 Former LSU running back Derrius Guice, proud and euphoric over his alma mater’s recent national championship, visited the White House with the team last week and posted a photo of him and President Trump today on Twitter.

It’s a shame. You can almost tell Guice’s hesitation, as it has taken him eight full days to post it, while he posted a photo of him and Vice President Pence on January 21.

It’s also a shame he had to post a sort of preemptive apology in his opening words, to the sick haters who simply cannot remove themselves from their own pitiful, pathetic attitudes toward life.

They gone get salty.. but I don’t get into politics. All I know is I come from nothing, and it will always be an honor to meet a president of the United States! God Bless everyone pic.twitter.com/aXb9PZyMij

One interesting side note is that Guice appears not to damn the man in his opinions, but instead address each situation as it comes. Back in July of 2018 he had this criticism for President Trump.

I don’t like Twitter wars, first of all, and we know that our President has been guilty of stoking them. I’m not sure I would have agreed with Guice back then, but so what? It didn’t turn into a Twitter war, he said his piece, and that was that.

That’s the point of a free country and having the adulthood in you to nod and accept other people’s opinions, if stated with respect.

But the 100% disrespect and intolerance of the Left has long entered asinine, obnoxious proportions. Today they are just following suit in a situation with which anyone in their right mind could simply just grin and nod their head and say “cool, I can see where he’s coming from even though I wouldn’t piss on the President if he was burning alive.”

Or at worst, how about you just skim over and ignore the tweet as the illogical rage boils through your cold blood that someone would actually be proud to meet the President of the United States.

But no. What Guice has gotten, along with his fair share of positive comments, is an onslaught of absolute absurdity that shows the worst, most disgusting side of the human race. 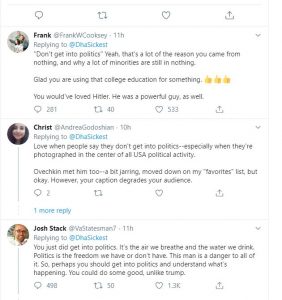 Now we know what these loons thought about a bunch of college kids getting to visit the White House after winning a national championship. I guess some black Americans are calling Justin Jefferson an Uncle Tom for shaking the President’s hand. Maybe the whole team is.

And of course Ed Orgeron and any white player there is just a black-hating racist.

This Cooksey cat above actually compared Trump to Hitler. Not new, I know. But wow. It is just mind-boggling how wholly stupid this gets.

Here are some others from the sometimes ridiculous world of Twitter. And of course if you want to get an even more complete taste of the sad, sad state of some people’s hearts, just visit the post on Guice’s page.

The smug moral superiority of the Left and their entitled stance that they can bully around anyone who even dares to disagree with them is why citizens who follow the truth as to what President Trump is doing for this country must stay vigilant in this war. It is a culture war of epic proportions, and we cannot fall asleep. We salute you, Derrius Guice, for having the audacity to be proud of one of the shining moments in your life. Don’t listen to the haters. They consume scum for breakfast and are what they eat.

Or I could say forgive them Father, for they know not what they do. But that is really, really hard to say sometimes.

Interested in more national news? We've got you covered! See More National News
Previous Article THE BATMAN: President Trump Does His Own Thing, the Right Thing–AGAIN
Next Article REMEMBER THIS DAY: LSU Football Has Given its Fans Memories for a Lifetime, Part III