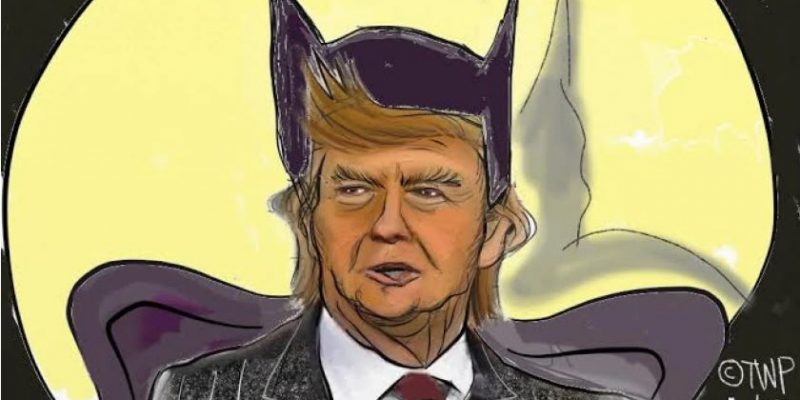 Batman is a hero difficult to fully like and accept, even to understand. It is why he is sometimes considered an anti-hero, because he performs his heroic deeds in a very unconventional way.

So does President Donald Trump.

President Trump has gotten compared quite often to the DC Comic character, usually in a satirical, condescending light. With his latest move in speaking at the pro-life march in Washington DC, he put on display for the world to see exactly how anti-Presidential and Batman-like he continues to be.

He displayed how very anti-heroic he is.

With one year left in his first term in office, the once-unashamed womanizer has not only given the pro-life community hope–he’s given them real, tangible reasons to believe he is sincere and in this war for the long haul. He became the first sitting President to speak at the March for Life, Republican or Democrat.

This, after proclaiming himself pro-choice in every respect two decades ago.

“Together, we are the voice for the voiceless,” he told the tens of thousands in attendance, standing on a stage alongside Republican Senators Mike Lee and James Lankford, who introduced legislation in 2015 to strip Planned Parenthood of federal funding. “When it comes to abortion, Democrats have embraced the most radical and extreme positions taken and seen in this country for years and decades, and you can even say for centuries.”

Trump is transforming his past. Bruce Wayne, the man behind the mask with Batman, transmutes his fear of bats–the tragedy of his past–into something good and transformative for society.

The thing is, he goes about it in his own way. And a lot of people, including the police, don’t like it.

It is precisely what President Trump is fighting with both Democrats and the Thought Police of our society.

“I don’t know enough about Trump to know what his stance was prior to his presidency. Even now, I don’t really care what he feels. I care what he’s doing,” said Nicole Burnshaw of Glen Mills, PA, who attended this year’s March for Life with her nine children.

Now, with his real-life and in-person appearance at the rally, Trump has irrevocably altered the standards for future Republican candidates for office.

Because of Trump’s daring appearance on the stage, simply declaring oneself pro-life will no longer be enough. Presidential candidates, perhaps even congressional candidates, will have to put the bite behind their bark.

“Every year, I’ve listened to Republicans tell us how pro-life they are. But a couple of years ago, when they had the House and the Senate and the Presidency, we didn’t defund Planned Parenthood,” said Lance Lohr, a resident of Lancaster County, PA, who attended his tenth March for Life on Friday. “I go by people’s actions, and in Trump’s case I believe he is pro-life because of what he’s done.”

Batman is the most complex hero we have in our lexicon, one with an extraordinarily dark past. He is a dark knight, a shadow who has vowed to fight evil all the while fighting his own inner demons. He is a hero without superpowers–an anti-hero who is one and the same with the villains he fights yet opposes them unapologetically with the things he does have at his disposal.

He is a vigilante not beloved by everyone.

He is a menace to society. A necessary one.

He is a killer. Of any evil that threatens to kill him or anyone else in his city.

Remind you of anyone?

It is not unlike the criminal who is later hired by the FBI to turn his life around and now help catch the criminals himself.

You see, in this war for the soul of our nation, it could not be the typical President to do it. Not even a Reagan could have done what Trump is doing, now in the 21st century. Trump came from the darkness, so he understands the darkness full well. He is a regular man who made his own life, oftentimes doing the morally questionable thing–but he is transforming and transmuting that now into something destructive and powerful.

Trump’s destruction is for one purpose and one purpose only–to bring to an end the Left’s sinister agenda to destroy this country and its moral fabric from within.

President Trump may be the most hated man on the planet. Pro-lifers are among the most despised by those on the Left. But find courage, find solace. For in this spiritual war, if you want to win, you will have to accept that hatred and trust that this “different” form of leadership, this Batman-like anti-heroism, is the only true force that can do it.