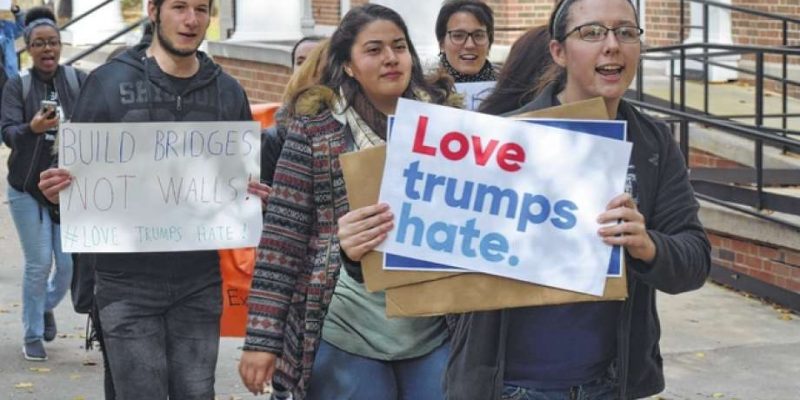 College students in liberal universities love to hate Donald Trump. It’s the hip and in-vogue thing to do.

I know. I was an older graduate student from 2015-2018, a late thirty-something able to somehow navigate the treacherous road of a Master’s Degree in English as a conservative-independent and still earn a measure of respect from my professors and peers.

Maybe it was because I frequently pointed to the many rhetorical fallacies being used in class discussions, in order to defend those who were not there to defend themselves against such a blind onslaught of idiocy.

Or, maybe it was just because I knew how to state my point without getting political, angry, or ridiculously biased about it.

The video below is relatively old, but it is worth visiting, not necessarily because of the tax plan being discussed in it, but because of something much more sinister and prevailing in universities: The indoctrination of young people, with the trash being spewed by politically-driven professors, may make parents think twice about assuming that a university education is always a good thing for their children.

Especially comical is how informed the students try their best to appear. When presented with points from Bernie’s tax plan (which are really Trump’s, remember), they don’t just agree with them; they give personal reason as to why that point connects to them, and why it would surely make for a better America. They find relevance and rapport with it, as if the common sense of it all should make it abundantly clear how easy it is to agree.

How can you not agree with Bernie’s plan? they’d say. We love Bernie!

Then the interviewer started dropping the truth bomb, of course.

These aren’t Bernie’s plans, kiddos. These are your despised President Trump’s plans. It is the vision of the man you love to hate simply because you are told to, and because you think it will get you accepted by the in, well-read, worldy, educated crowd…while all these Trump Neanderthals waste away with their little brains and racist, bigoted philosophies.

One student “articulated” it best:

“Wow! Well…that’s interesting. Wow.” It was all said while a bundle of nerves racked her body, as she flipped her hair and touched her nose and eyeglasses, not knowing what to say, what to do, what to think. She was a cerebral mess, unable to even fathom that her house of cards understanding of a man she never really got to know could be so far removed from the reality that she actually agreed with him.

Maybe she’d go to her Psych class and have something to discuss concerning Cognitive Dissonance.

Or maybe she’d just try to forget the whole thing and go back to hating the very man she just agreed with. Just because that’s the easiest thing to do.

Because that’s all this Trump hate has become. It has long been devoid of rhyme or reason. And you don’t need to read this article to know that.

It doesn’t matter that the video is from 2017. And if it does matter, it only does because this senselessness has intensified all the more over the last three years. The video could have easily been recorded January 24, 2020.

Not to mention that Bernie is seemingly on the rise on the Left. It is imperative that we not take this year’s election for granted.

University discourse has been in bad shape for decades now, and it’s only getting worse. Let that be a caveat to any parents who begrudge their children for just wanting to join the work force immediately out of high school or learn a trade. I am a passionate, hard-working teacher and writer who harbors a life-long love for education, but I tell ya, if I had children, I might have to rethink my values and my vision for what is good for them.

Interested in more national news? We've got you covered! See More National News
Previous Article Bernie Sanders Is Surging In The Dem Primary
Next Article THE BATMAN: President Trump Does His Own Thing, the Right Thing–AGAIN