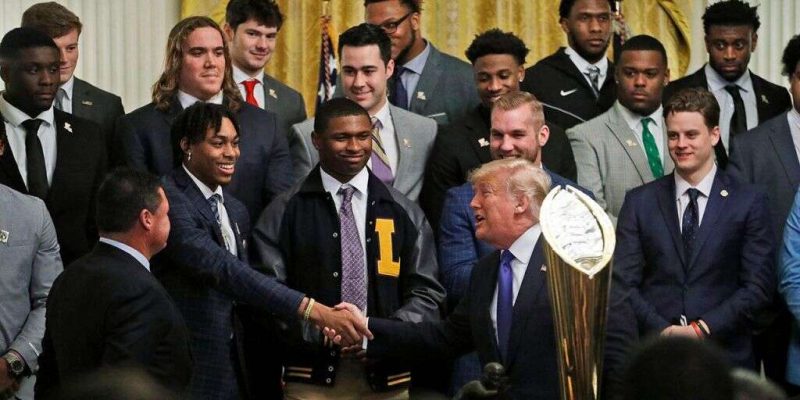 LSU Tiger fans know that head coach Ed Orgeron took his team to Washington on Friday. By all accounts, it appeared to be a great time for all.

In fact, the team took over the Blue Room, one of the reception areas at the White House, and partook in a dance that showed the unique personality of  this team.

The automatic trip to the White House for a sports champion has become a major political affair since Donald Trump became President. Some go, some don’t.

As far as the NFL goes, just to pare my comments into a sample, the history of teams visiting the White House goes back to 1980 when President Jimmy Carter was presented a terrible towel by a member of the Steelers. Pittsburgh was making a joint appearance at the White House with the 1979 World Series champion Pittsburgh Pirates.

NFL teams visiting the White House became an annual occurrence in the late 1980s under President Ronald Reagan. In the 2000s, fourteen consecutive Super Bowl winners would visit the White House before the Eagles broke the trend in 2018.

There is a similar picture when it comes to other sports teams. Again, some go, some don’t.

Here’s the thing that people forget because President Trump is such a popular target of hate: There have always been championship teams and individuals who have skipped the visit to the White House for one reason or another.

Back in November before the Alabama game, when President Trump announced he would be attending, LSU quarterback Joe Burrow was interviewed by Marty Smith of ESPN. Smith asked him his thoughts on the president’s visit. Burrow’s response was something every single person in America could stand to hear.

Especially the large (irony) contingent of Bama student protesters who just couldn’t stand the thought of a president’s visit while they held their signs or waited to drink their lattes.

On Friday, Burrow echoed that sentiment.

“I don’t care if you’re Republican, Democrat, don’t care about politics at all, that was an awesome experience for everybody.”

President Trump offered his condolences to Tiger assistant coach Steve Ensminger, who lost his daughter-in-law, Carley McCord, on the day of LSU’s playoff semifinal victory over Oklahoma in the Peach Bowl. He offered Ensminger and his family just what every LSU fan has offered since the day of the tragedy–his thoughts and prayers.

PRAYING FOR YOU: Louisiana Will Hold Coach Ensminger Close to its Heart Today

Washington, D.C. The President. The LSU Tigers. Dancing in the Blue Room. Honorable words for the nation’s highest seat. Words of sympathy from that seat for one of LSU’s own.