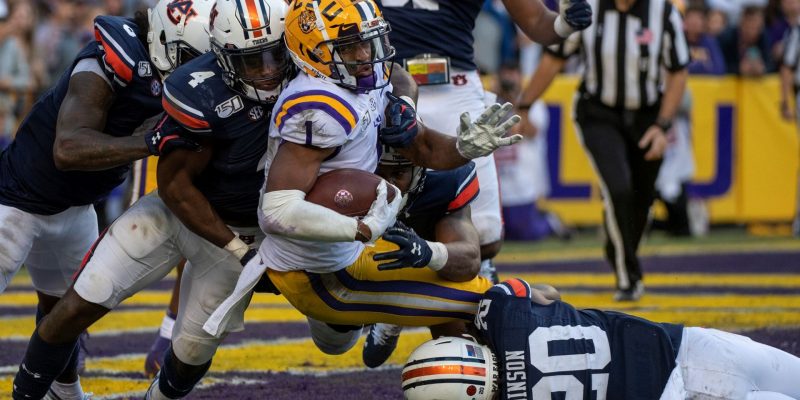 …Burrow and the Tigers went out that night and took the Gators’ best shot. In gashing Florida, Burrow established himself against a stellar SEC defense, despite being challenged beyond what he’d been through to this point in the schedule.

There were no more reasons to believe otherwise: Burrow and LSU were both elite. And national championship aspirations were real.

But still, other landmines loomed, including the memory of a coach and a team and a championship that could have been–and maybe should have been–all LSU….

Read the rest of Part I here.

Auburn and Alabama were back-to-back in 2019.

Sure, there was an idle week on the schedule in between to soften the blow, but this portion of the schedule, in all its hard-hitting thematics, would clearly be the climax of the season. Get past these two games unscathed, and it might be all downhill from here.

The Tigers would face and beat a record seven top-10 teams in 2019-20, and none of them, according to Tiger center Lloyd Cushenberry after the season ended, was tougher than the Auburn game.

Auburn’s defensive line was widely considered the best in the nation this past season. It would only make sense that an offensive lineman like Cushenberry would feel the way he did.

Still, you probably remember this war with the War Eagles going well beyond the trenches. Despite Auburn’s eventual 9-4 finish, they were ranked No. 9 at the time of their trip to Tiger Stadium, and everything was still right there in front of them on the schedule.

Joe Burrow threw one of his miniscule six interceptions on the season in this game, and threw for “only” 321 yards–what would end up being his third-lowest total of the season.

Clyde Edwards-Helaire foreshadowed the grit and determination he would display in the Alabama game two weeks later with 136 rushing yards on 26 carries against that vaunted Auburn line.

The game was tied at 10 at the half, and Auburn held a 13-10 lead until Edwards-Helaire’s six-yard touchdown run made it 16-10, after Cade York’s PAT failed.

You’ll remember it being that kind of game. A lot didn’t go right, and the Tigers had to just keep grinding, keep grinding, right until the final gun. LSU had to recover a pressure-packed onside kick in order to run out the clock. LSU prevailed, 23-20, in what would be the smallest margin of victory all season long.

Whew. You breathed. You had a couple of weeks to recover before the big one.

The really big one.

The Alabama game, of course, is where LSU had stubbed its toe so many times in the last decade, all the way back to the 2011 debacle when the Tigers were not rewarded for a regular season victory in Tuscaloosa and were mauled in the national championship game in the rematch. But the 2019 Bama game proved to be a microcosm of this year’s team, as the Texas game had, in that LSU could combine a spectacular fireworks of offensive display with a tough, hard-nosed grit few “pretty” teams have.

Two days before Veterans Day, on Saturday, November 9th, the LSU Tiger football team, led by some of the most unlikely heroes, marched into Bryant-Denny Stadium, and in front of 102,000 mostly hostile fans, systematically dismantled the Alabama defense with surgical precision. The Tigers strategized and executed their way to the most points against a Nick Saban-coached team since 1998.

In the previous five meetings with the Tide, LSU’s paltry offense had amassed only 39 total points.

Led by a group of underdog upperclassmen, with President Donald Trump in attendance, these Tigers scored 46 in one night, and by then had proven they were the most fearsome offensive unit in college football.

You’ll remember Edwards-Helaire’s 180 total yards, his clutch play after clutch play–a coming-out party that solidified his position as one of the most invaluable assets on the team. You’ll remember Ja’Marr Chase’s 140 receiving yards, a non-verbal announcement that he was the best wide receiver in the nation.

(If, of course, it wasn’t teammate Justin Jefferson).

You’ll remember Burrow becoming the frontrunner for the Heisman trophy after throwing for 393 yards on 31-of-39 passing, and rushing for an additional 64 tough yards.

You’ll remember his clutch third down conversions in the fourth quarter–both with his arm and his feet–every time Alabama had gained the momentum and the support of a raucous crowd.

You’ll remember not being able to believe the 33-13 halftime score and still not trusting that it would be enough.

And you’ll remember being right.

After Auburn, the second smallest margin of victory all season.

It was a shocker to the nation for sure. But not to the Tigers, not to the players and coaches in that locker room.

How little did you know that never would the Tigers ever be seriously threatened late in a game ever again….

Interested in more news from Louisiana? We've got you covered! See More Louisiana News
Previous Article Who knew a hedge could be so important?
Next Article Did you know the U.S. Supreme Court has never defined “Religion”?