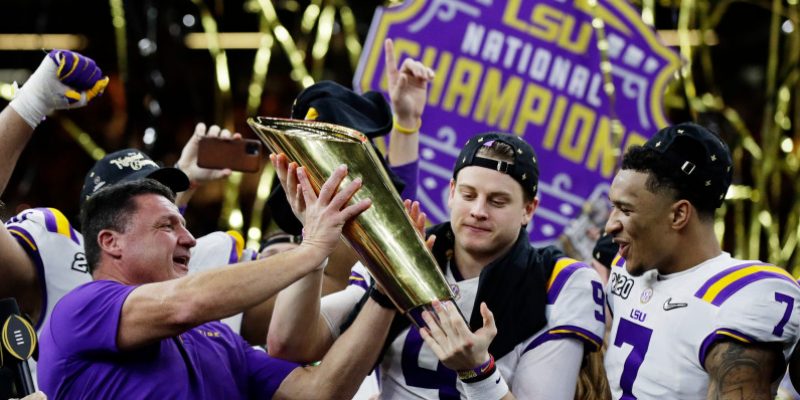 On the morning of the national championship game, LSU released a hype video narrated by The Rock, one that used the theme of remembering the past in order to inform and inspire the present.

If the hype video worked on the team, it clearly inspired the present, as LSU whipped Clemson 42-25 in the Superdome to claim the program’s fourth national title in the modern era.

The past has been redeemed by the present. And the future looks awfully bright again.

REVERSE THE CURSE: A Title Could Heal the 2011 Disaster in New Orleans

Yes, he has a total of six titles. Yes, that is more than the three LSU has claimed this century. But at least today, on January 14, 2020, LSU fans can say that they belong. They can rework their minds to frame this championship season as simply the third chapter in a book still yet to be finished.

And that you beat both current powers in Alabama and Clemson to do it.

But you don’t have to stop there. Extend it further. You beat all of the top four teams from the preseason AP poll, the first time it has happened in college football history.

As you recollect this season years from now, or even next week, you cannot help but gloat in the glory of it. National powers dethroned. Past failures exorcised. A ridiculous plethora of records shattered and perhaps put permanently out of reach.

You will see this season for the magical ride it was, that it may never be again.

Sure, you may not remember opening the season on fire against Georgia Southern to the tune of 55-3, because the jury was still out on how the Tigers would fare on the road the following week at No. 9 Texas.

You’ll remember that Texas game, that back and forth affair in the second half, when the Longhorns kept threatening but Joe Burrow and company stayed as cool as could be in the unbearable Austin heat.

You’ll remember 3rd and 17 in the fourth quarter, and Burrow to Jefferson.

You may not remember ESPN analyst Kirk Herbstreit gushing over the Tiger offense on national television, and emphatically announcing that LSU would be a very dangerous team in the SEC.

But if you do remember, you know it was like validation for what you were already coming to suspect.

How could it not be true, when Burrow dismantled the Longhorns for 471 yards and four touchdowns on 31-of-39 passing?

Or when you look at that monster trio of receivers and see the following stats?

Is this for real, you likely asked? Is this the same LSU team that had largely become allergic to the forward pass in the middle of the field under the direction of former head coach Les Miles?

You knew it was no fluke because it was on the road in a hostile environment. You knew this might just turn out to be a special season after all.

You were loving the Coach O hire and laughing at Texas head coach Tom Herman for leveraging LSU to get the job at Texas three seasons ago.

But then, it was back down to Earth. You knew you had to go through the motions the following Saturday against FCS underling Northwestern State. You may remember that game only because the Demons actually led the Tigers 7-3 after the first quarter, only to get trounced in the end, 65-14.

Next was Vanderbilt on the road (66-38) and Utah State in Death Valley (42-6). Two 11 am starts no one wants on the schedule, but two blowout wins nonetheless that got the Tigers to 5-0.

It also got Burrow a two-game total of 742 yards and 11 touchdowns.

You were noticing the video game-like numbers but maybe were thinking, surely this can’t last forever. Surely he’s going to stub his toe at some point and throw six picks in a three-touchdown loss on the road.

Probably to Alabama in Tuscaloosa.

Don’t get your hopes up.

You’ve been here before.

Better to avoid hope and in the process eliminate any and all future disappointment.

But still, you were thinking, man, this dude can sling it. This dude is cool under pressure.

This team is really, really good.

The Florida Gators came to Tiger Stadium next and were a tough out. They led for much of the game, and the Tigers’ mettle was tested.

Hopefully you’ll never forget how electric Tiger Stadium was that night, how the fans stayed till the end, how the valley came alive for four quarters as it hadn’t done in a non-Alabama game in many years.

You may remember that it was at this point that you really starting thinking Burrow might really be that good. (Or wait, didn’t we think that before?) Ok, maybe Texas isn’t that good after all, you might have said before Florida. And all those other teams are certainly bottom feeders.

And you still have Alabama coming up….

Please God don’t wake me up from this dream….

But this is Florida…

This win had to have proven something.

Burrow and the Tigers went out that night and took the Gators’ best shot. In gashing Florida, Burrow established himself against a stellar SEC defense, despite being challenged beyond what he’d been through to this point in the schedule.

There were no more reasons to believe otherwise: Burrow and LSU were both elite. And national championship aspirations were real.

But still, other landmines loomed, including the memory of a coach and a team and a championship that could have been–and maybe should have been–all LSU….

Interested in more news from Louisiana? We've got you covered! See More Louisiana News
Previous Article New California eliminates 1099 workers, saying they have to be hired as W2s, instead thousands lose income
Next Article The Entire Rationale For A Clay Schexnayder Speakership Is A Lie