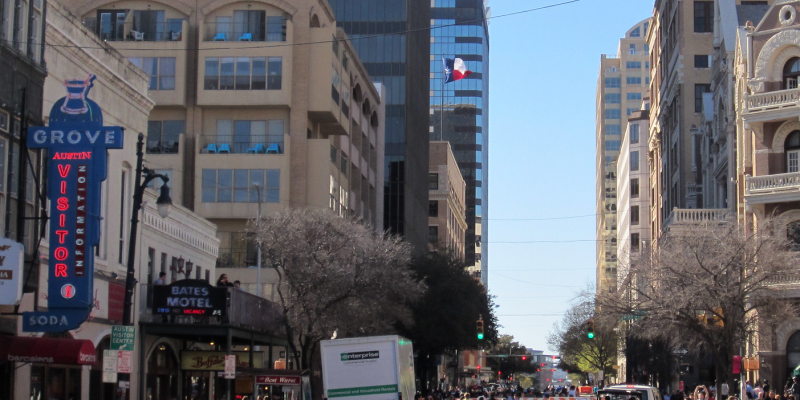 The Teacher Retirement System of Texas may be having some serious financial woes in its pensions funds lately, but they apparently still like to party. A high-rent arrangement for possible office tower space in the famous Sixth Street entertainment district may be only the tip of the iceberg, as Austin broadcaster Leland Freeman uncovers below.

The University of Texas System and City of Austin are financially benefiting at the expense of the recipients of the Texas Teachers Retirement System.

As reported by Austin’s NBC affiliate KXAN-TV on Jan. 17, and the Texas Scorecard on Jan. 18, the Texas Teachers Retirement System is leasing three floors in a 36-story office tower in the heart of Downtown Austin called the “Indeed Tower”
for over $326,000 a month at the start of the lease, only to increase to $383,000 a month towards the end of the 10-year contract.

Meaning the TRS will be paying around $42 million over the course of the lease.

What wasn’t reported by KXAN or Texas Scorecard is the fact the Indeed Tower is being constructed on land owned by the University of Texas System. In a press release from February 7, 2017 The UT System entered a 95-year ground lease with Trammell Crow for $60 million to developed the land on which the Indeed Tower. The UT System touts in the article “The Redevelopment of the UT System downtown property will generate million in revenue for the City.” The UT System also sold a neighboring property to The Texas State University System for $8.2 million.

Keep in mind the The UT System and the Texas State University System are taxpayer-funded public university systems who the first question is how much are the taxpayers of Texas on the hook transferring property from one Texas Government owned entity to another? This should be a recurring question asked about the Indeed Tower. If the lease payments were spread out evenly over the course of the 95-year contract, Trammell Crow would be paying the average of $631,578 a year to the UT System. To put this into perspective the TRS pays that much for 58 days of rent.

To put it bluntly, the State of Texas is loosing nearly $3.6 million dollars a year on this deal of leasing office space in a building built on land owned by a Entity publicly funded by the Texas government.

This clearly seems to be a case of corporate welfare at the expense of the recipients of the TRS which ultimately is at the expense of taxpayers of the State of Texas, especially since the TRS has a $46 billion shortfall as pointed out by Cahnman’s Musings referencing an article published on the Texas Tribune’s TribTalk on April 22, 2019.

So another question is why does the TRS even need new office space? The TRS has been around since 1937 and provides retirement and related benefits for more than 1.6 million Texas teachers, college professors, and other educational employees. It is supported by the State of Texas and manages a $150 billion trust fund established to finance member benefits. After 84 years why does this bureaucracy need to expand into new office space? Shouldn’t technological advancements in accounting automation allow for a reducing on staff, no necessitate an increase in staff?

Further: why is the TRS moving from a building that is owned by the Texas Government into a building that is owned by a private developer that has to pay property taxes and thus even if the lease is less than the going rate, still has to be financially profitable enough to them to justify not renting the space to the private sector? If that particular address was so desirable to the TRS, then why wasn’t a deal struck with the UT System directly to either build on that specifically for the TRS, or move the agency into the New UT System administration building which was build with several floors unoccupied meant to be leased out to other tenants.

At the end of the day this is a terrible deal for the taxpayers of Texas and recipients of the TRS. The TRS lease is helping subsidize Trammell Crow develop a 36-story office tower which has to pay untold amount of money in Property Taxes to the City of Austin and Travis County.

For the taxpayers complaining about “Robbin Hood Funding” having to pay property taxes to fund other school districts, well, part of your property taxes going to education to paying for salaries and pensions for Texas teachers is, at the end of the day, going to the City of Austin, Travis County, the University of Texas System and corporate welfare to Trammel Crow instead of where it should be going: into the retirement funds for teachers.