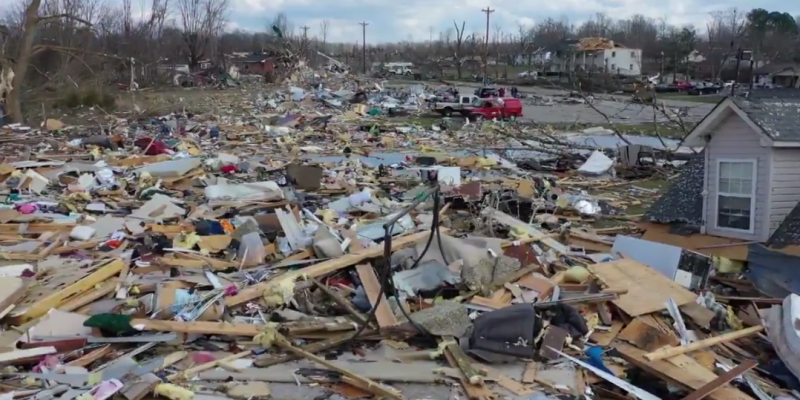 Tennessee remained in a state of emergency Wednesday as recovery and cleanup efforts continued after early morning tornadoes hit Tuesday.

The death toll stands at 24, with Putnam county being the hardest hit, according to the Tennessee Emergency Management Agency. Eighteen people – 13 adults and five children – were killed in Putnam County, and 21 people are still missing.

NEWSFEED NOW: Storms ravaged most of middle Tennessee early Tuesday morning, and Putnam County was one of the hardest places hit during the severe weather. More here –> https://t.co/iXLRIRqS78 pic.twitter.com/AezMhsdhPF

With a big focus on Nashville, today is revealing just how bad rural Putnam County was hit. 18 of the 24 killed across the state died here. Devastation everywhere. There was a home where that slab of concrete is. #TennesseeTornadoes pic.twitter.com/Bi36jmZKlk

The amount of first responders across Putnam County and in Cookeville right now is remarkable. From all areas of the region— working to find anyone still trapped, hugging homeowners who have lost everything, working through debris. THANK YOU. pic.twitter.com/PLvEwdlVq8

The scenes are devastating, the numbers even worse. 22 people are missing, 24 people have died, 18 of them from #Cookeville, #PutnamCounty, #Tennessee, and 5 of those 18 are children under 13 years old. @weatherchannel continues live stories of survival after tragedy. pic.twitter.com/YcwwWcGlac

About 40,000 people remain without power, predominantly in Davidson County, according to TEMA.

People can call a crisis clean-up hotline 1-800-451-1954 to ask for help with muck-out, debris removal and home clean up. All services are free, but TEMA warns services are not guaranteed because of an expected overwhelming need.

In response, President Donald Trump said he will be visiting the state Friday.

I will be going to the Great State of Tennessee on Friday. The USA stands with the people of Tennessee 100%, whatever they need! The tornadoes were of record size & velocity. God bless your loved ones & all of the families affected! Thanks to @GovBillLee & @MarshaBlackburn