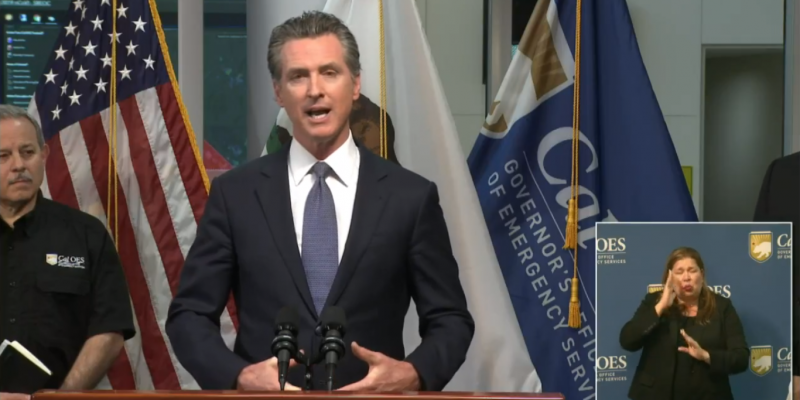 The move comes as the Governor says some parts of the state have continued to see cases double every few days despite the implementation of social distancing measures.

“We need to bend the curve in the state of California,” Newsom said of the Golden State which has received much of the brunt of the outbreak as the state with the third most cases in the Country.

The Executive Order which took effect at midnight outlines the harshest measures yet to contain the coronavirus including requiring citizens to remain at home except when absolutely necessary to travel.

The order also mandates the closure of all food establishments & non-essential businesses and the continued on-site service of state employees in 16 “critical infrastructure sectors”.

“I don’t believe the people of California need to be told through law enforcement that it’s appropriate just to home isolate, to protect themselves, go about the essential patterns of life, but do so by socially distancing themselves from others and do so using your common sense.”

As of this morning, California has at least 1,000 cases of covid-19 and 18 deaths from the virus. Shockingly, several authorities on the matter have projected that more than half of the state’s residents will contract the illness over the next 6-8 weeks.

The order came shortly after a similar measure was taken by Los Angeles Mayor Eric Garcietti who said, “We’re about to enter into a new way of living here in Los Angeles.”

Read “the meat” of Governor Newsom’s Executive Order below,

“To preserve the public health and safety, and to ensure the healthcare delivery system is capable of serving all, and prioritizing those at the highest risk and vulnerability, all residents are directed to immediately heed the current State public health directives, which I ordered the Department of Public Health to develop for the current statewide status of COVID-19.”