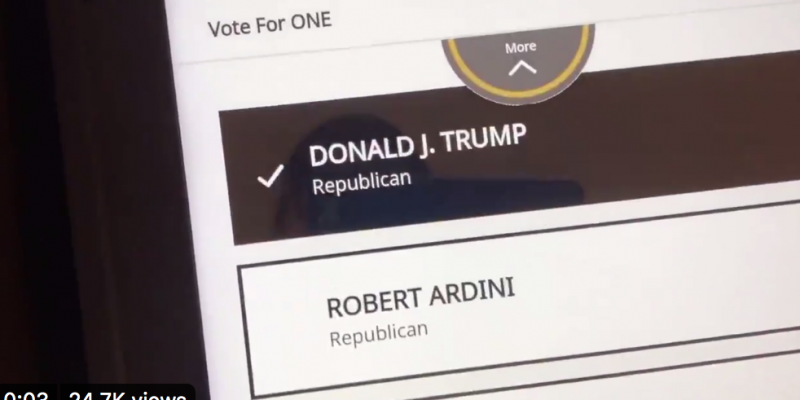 This year, the California primary election is held on Super Tuesday (March 3) instead of in June. Many previous polling locations aren’t open this year and voters have been routed to “voting centers.”

Last year, a new state law implemented several voting method changes, including new voting machines with touch-screen tablets that display the ballot in 13 languages. When a voter is finished making selections electronically, a paper ballot is printed from the machine to verify the selections.

The city of Beverly Hills has sued the county over the new system. Its claim argues the new system “contains a severe ballot design flaw” because the tablets are programmed to only display the names of four candidates on the first page. Voters then have to tap a button labeled “More” to view the remaining candidates.

One California voter, Martin Shawn Kuchinsky, posted a video on Twitter of how he found it difficult to find candidates on the ballot. The video recorded on his phone shows him scrolling through a list of names, and in the tweet he says, “They hide Trump. You actually have to find him among ‘others’.”

Other voters are also posting videos of how they used the electronic and paper ballot system on social media.

There are a total of 20 candidates for president listed on the Democratic ballot in California this year, despite there only being six candidates still left in the race.

Secretary of State Alex Padilla emphasizes that all resources for voters can be found at www.vote.ca.gov.

If voters submitted, mail-in ballots they should double check that their ballot was not rejected by visiting https://voterstatus.sos.ca.gov.

“California is working hard to maintain the integrity of our election and to make sure every vote is counted,” Gov. Gavin Newsom’s office said.

California is reporting a record level of voter registration, more than 20.5 million registered voters this year.