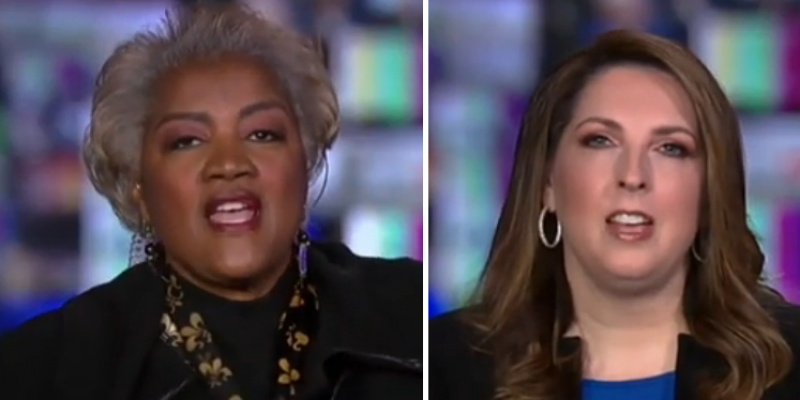 McDaniel, alleging that the Democratic primary process will be “rigged” against Sen. Bernie Sanders (I-Vt), kindled Brazile’s anger, in which she defended the Democratic Party’s process invoking a well-debunked conspiracy theory about Russian collusion.

Watch the exchange here if you haven’t seen it already:

“First of all, you don’t have a process,” Brazile said. “They are canceling primaries. They have winner-take-all. They don’t have the kind of democracy that we see on the Democratic side. For people to use Russian talking points to sow division among Americans, that is stupid. So Ronna, go to hell! This is not about — No, go to hell! I’m tired of it …!”

I’d be having a bad day too if my party was still hopelessly divided.

Talk of a brokered convention and the DNC trying to stop Bernie obviously hit a little close to home.

“It’s ok, Donna Brazile,” McDaniel wrote via Twitter. “I’d be having a bad day too if my party was still hopelessly divided. Talk of a brokered convention and the DNC [Democratic National Committee] trying to stop Bernie obviously hit a little close to home.”

Brazile, responding to FOX News co-anchor Ed Henry‘s offer to set up a (hopefully calmer) in-person debate between she and McDaniel, then mixed religious traditions in her softening of her earlier remarks.

“I’m all about reconciliation,” Brazile said. “It is Lent. I’m trying to keep my kharma. But stop lying about the Democratic process.”

The Hill reminds us that Brazile “faced a firestorm during the 2016 presidential race after emails released by WikiLeaks showed she had passed along questions to the Clinton campaign before two separate CNN town halls involving Sanders and the former secretary of State.” Brazile was dismissed as a CNN political analyst before FOX News later picked her up.