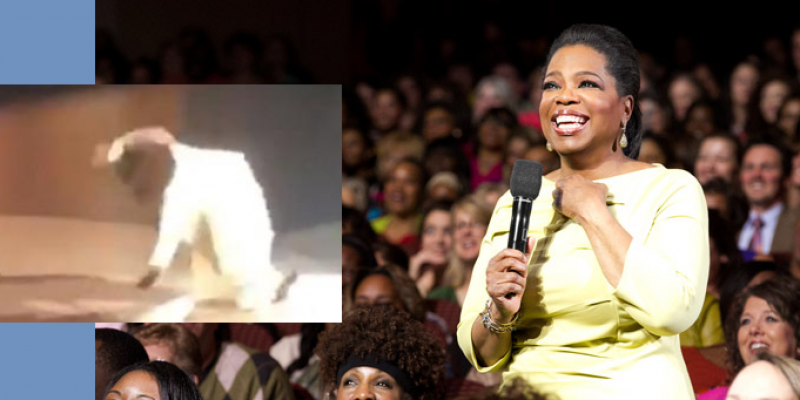 She was discussing “balance” just before her shoe apparently gave out, leading her to fall on stage, accompanied by gasps and several supportive comments from adoring fans.

Winfrey, 66, spoke at The Forum arena in Los Angeles Saturday as the first part of her “Oprah’s 2020 Vision: Your Life in Focus.” Watch the fall here:

“Here’s my definition of what wellness means to me … Wellness to me means all things in balance. And balance doesn’t mean all things are equal or at peace at all times,” Winfrey said, just before losing her footing.

She laughed off the fall as a wardrobe malfunction. “Wrong shoes,” she quipped. She appears to have fallen on her microphone, which exaggerated the “thud” sound of the fall.

Oprah, who identifies as a Christian and was raised a Baptist, has come to see church as something within rather than a gathering of other Christians. “I have church with myself: I have church walking down the street. I believe in the God force that lives inside all of us, and once you tap into that, you can do anything,” she said.

Oprah famously led a multi-faith prayer service following the 9/11 terrorist attacks, during which she made many equivocating references to different religions. “I believe when you lose a loved one, you gain an angel whose name you know,” Oprah said, flanked by representatives of the world’s major religions.

From the hip: Some of her harshest critics would call it kharma, but they probably don’t believe in it.

“As Oprah is preaching a sermon on things being in balance, she appears to lose her balance as she trips and falls on stage and blames it on her shoes,” the Evangelical firebreathers at Reformation Charlotte noted. “Oprah, being the false teacher that she is — creating an entirely new religion of idolatry — exposes herself as she embraces a mixture of the prosperity gospel and new age paganism.”