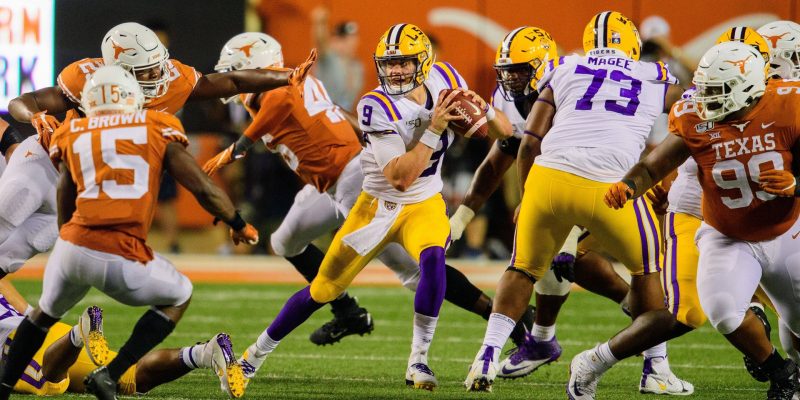 The green beer isn’t flowing and the parade floats aren’t rolling this year, but it doesn’t mean luck can’t be on your side.

It is, however, oftentimes better to be good than lucky, and certainly back in September, on an electric night in Austin, Texas, the No. 6 LSU Tigers were formidably good on the road against the No. 9 Longhorns.

One play among many stands out from all the rest. In a way, today is third and 17, just as it was six months ago.

With LSU clinging to a 37-31 lead with two and a half minutes remaining and the Texas faithful roaring at a fever pitch, Tiger quarterback Joe Burrow received the snap on an impossible third and 17 play, and was under heavy pressure from a blitz almost immediately. He almost got lost in the storm enclosing around him.

Then, the day cleared. The rainbow came out. The senior star came through in the clutch, etching in an early Heisman moment, when he nimbly stepped up in the pocket and fired a golden dart to wide receiver Justin Jefferson.

It was a 61-yard touchdown strike that silenced the deafening noise of the Texas fans, and instantly put LSU on the map as a legitimate national title contender.

Tiger fans at home were likely going crazy and didn’t even hear ABC play-by-play man Rece Davis calling it a “knockout punch,” as the Tiger band played its touchdown song in the background.

And of course there was the image of poor Matthew McConaughey and the word TV cameras caught him saying, but who cares.

The play took talent, skill, preparation, and yes, if you watch it, maybe even a little luck.

Let’s take a step back and look at what led to the now infamous play….

Led by junior quarterback Sam Ehlinger, Texas had scored 24 second half points and showed no signs of being stopped, as LSU defender after defender seemed to fall from dehydration. With the score 37-31, the Longhorns’ kickoff sailed through the endzone for a touchback, and LSU head coach Ed Orgeron asked offensive coordinator Steve Ensminger on the headset if he wanted to go into the four-minute offense.

It was a conservative tactic designed to run out the clock.

It was a conservative tactic LSU fans knew of all-too well–and likely expected.

So many times in the past, including late last year against Texas A&M, the Tiger offense couldn’t get the job done in running out the clock. It would fail in the conservative approach, and feebly hand the ball right over to the opposing offense to score their own winning points.

It has left Tiger fans saying “what if?” far too many times.

Said ABC color analyst Kirk Herbstreit: “What I want to know is: do you run the ball? Do you work clock? Do you force them to use timeouts? Texas has got to pin their ears and come after Burrow and anticipate the run. They have to sell out here, which means they’ve got to leave their corners in man-to-man coverage, which has been a problem all night.”

It would be a problem for Texas that LSU knew it could exploit when the right time came.

Ensminger knew this well. Orgeron said his offensive coordinator assured him that they could pass the ball and make some first downs, to which Coach O replied, “Go get it.”

After getting two first downs, the Tiger offense stalled around midfield. A first down pass attempt to Jefferson went incomplete, and Burrow was sacked on second down, setting up third and 17 from the LSU 39. Texas called timeout to set up the defense.

One third and a mile play could have eliminated the possibility of everything that happened last year. Everything.

Texas defensive coordinator Todd Orlando knew his blitz package was in line with his overall philosophy of aggressiveness in long down-and-distance scenarios.

His defense would come hot and hard at Burrow. It was just a question of from where.

The thing is, it was a chess match. Burrow, Ensminger, and passing game coordinator Joe Brady were anticipating things as well. They predicted exactly what ended up happening.

“I knew they were coming,” Burrow said. “They were blitzing one more than we had to block, and they had a spy on me in the middle. I knew if I bought time, my guys were going to be open.”

It was precisely what ABC man Herbstreit had predicted.

And precisely what the Tiger receivers could exploit.

Texas sophomore safety Caden Sterns was playing with inside leverage against Jefferson, who had already gone over 100 yards receiving and scored two touchdowns in the game.

Somehow Jefferson beat the leverage, cut across the middle of the field, plucked the perfect pass out of the air, and raced up the sidelines for the decisive score.

Sterns, who was actually Orgeron’s first commitment at LSU before he flipped to Texas, fell face-first on the artificial turf, whiffing on the tackle.

Perhaps that’s where some of the luck came in.

Said Burrow about one key aspect of the play that may have gone unnoticed, “Clyde (Edwards-Helaire, running back) did a great job of picking up the blitzing linebacker right through the middle. He cut him.”

“It’s a throw that I’ll remember for the rest of my life,” said Edwards-Helaire. “Joe was getting hit and threw a ball off one leg side-armed to Justin Jefferson. That’s something I’ll take to my grave. A guy with arm talent like that and being so composed, that’s hard to find, and we have it.”

Indeed, every piece of the play, from the preparation in the off-season, to the call on the field, to the execution by every player out there, was necessary.

And it proved that LSU wouldn’t only talk about changing their entire offensive philosophy as a program–they were going to deliver.

“That is the difference in LSU,” raved Herbstreit. “Even me up here, I’m thinking, You’ve got the lead. Run the ball. Make them use their last timeout. But this is 2019 LSU. This is Joe Burrow. Forget that. ‘We’re here to win. We’re here to play for championships.’”

“What a great play,” said Orgeron. “I’m always going to remember that play.”

You’re up six, but your defense can’t stop them.

And then Burrow finds Jefferson and the rest is history.

It was more than a play. More than a game of chess. More than a beautiful example of flawless execution. It was a symbol of something greater. It was a threshold crossing for a team and a program that foreshadowed the greatest season in college football history, one magical ride on a rainbow.