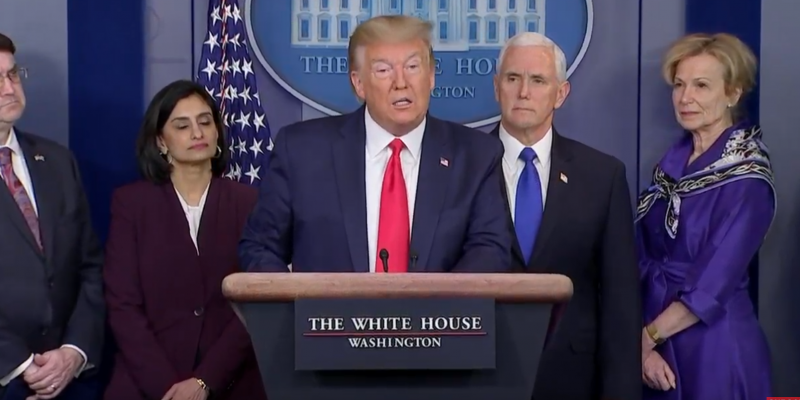 Referring to the fight against the novel coronavirus as a war, President Donald Trump said Wednesday he is invoking the Defense Production Act (DPA) to help protect the country.

Trump also announced that FEMA is at Level One, and that he is implementing aspects of the Stafford Act, which enables the president to expedite and expand the supply of resources from the U.S. industrial base to support military, energy, space, and homeland security programs.

Homeland security programs eligible for DPA support include efforts to counter terrorism within the U.S., emergency preparedness activities conducted pursuant to title VI of the Stafford Act, protection and restoration of critical infrastructure, and continuity of government.

The president also announced the closing of the North American border with Canada to all non-essential travel. The border closing will not impact transportation of goods or commerce.

The president said the first clinical trial began in Washington state, after the first genetic sequence of the virus was published in January. Being able to create a human vaccine within 8 weeks is “the fastest development in history,” Trump said.

Public-private partnerships have also resulted in further steps to expedite testing, including a self-swab, Trump said, although he could not go into detail about it and it has not yet been released.

Under the DPA, several federal agencies have implemented new policies.

The Department of Housing and Urban Development has suspended all evictions and foreclosures until the end of April.

The DOD has certified its 16th lab to help test for the virus. It is also making ready two hospital ships, Mercy and Comfort, will be launched next week, one in the harbor of New York City, one on the West Coast, although the location has not yet been determined, the president said.

“Medicare patients can now visit any doctor by phone or videoconference, at no additional cost, including with commonly used services like FaceTime and Skype – a historic breakthrough,” Trump said.

The White House Coronavirus Task Force issued new guidelines for “15 days to slow the spread” to help protect Americans during the global coronavirus outbreak, building on recommendations by the Centers for Disease Control (CDC).

Everyone is encouraged to avoid crowds of more than 10 people, and continuing to practice strict personal hygiene.

The guidelines emphasize that people to wash their hands frequently and thoroughly, work from home if it’s an option, disinfect frequently touched surfaces, and isolate themselves and loved ones if they feel sick.