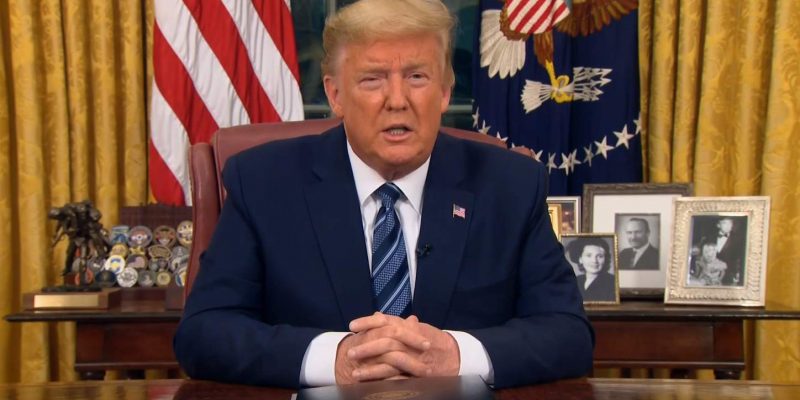 President Trump addressed the Nation from the Oval Office last night, announcing the suspension of all travel from Europe into the United States to help slow the global coronavirus outbreak.

The President called the US government’s response “unprecedented” saying,

“Today the World Health Organization officially announced that the coronavirus is a global pandemic. We are in contact with our allies and we are marshalling the full power of the federal government and the private sector to protect the American people.”

“By taking early, intense action we have seen dramatically fewer cases of the virus in the United States than are now present in Europe. The European failed to take the same precautions and restrict travel from China and other hot spots. As a result, a large number of new clusters in the United States were seeded by travelers from Europe.”

“After consulting with our top government health professionals, I have decided to take several strong but necessary actions to protect the health and well-being of all Americans. To keep new cases from entering our shores, we will be suspending all travel from Europe to the United States for the next 30 days.”

Soon after his remarks, the National Basketball Association (NBA) announced that it would suspend the season after learning that a player from the Utah Jazz had contracted COVID-19.

There are over 1,300 cases of coronavirus in the United States with 36 proving to be fatal so far. Fortunately, there are reports of major break-throughs being made in the creation of a vaccine in Texas and Israel.

There have also been more than 20,000 deaths from millions of cases of the flu this season. To avoid both pathogens, U.S. health officials continue to stress the importance of washing your hands and not touching your face.

See part of the President’s Oval Office Address below: