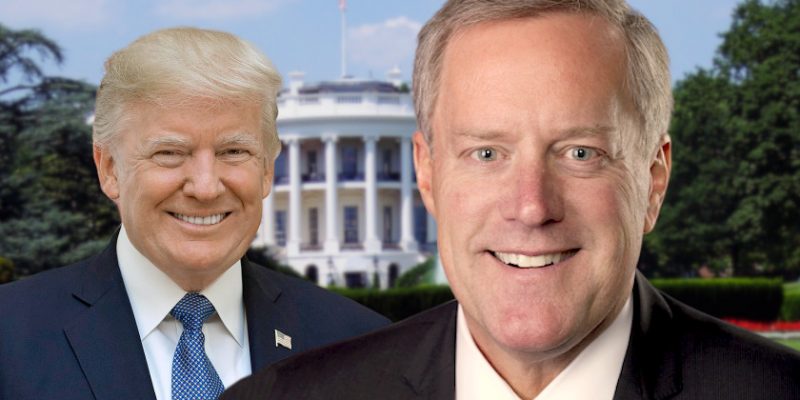 President Trump made an important announcement over the weekend, tapping Congressman Mark Meadows (R-NC) to be his new White House Chief of Staff – the most powerful position in the White House after the President and Vice President.

Meadows has served the 11th district of North Carolina in the US House of Representatives since being first elected in 2013, also leading the conservative-controlled House Freedom Caucus from 2017-2019.

It is the third permanent appointment to the position as President Trump has relieved two other Chiefs of Staff since assuming office including former RNC Chairman Reince Preibus and General John Kelly.

Mark Meadows will take over for Mick Mulvaney who has served as Acting Chief of Staff since Kelly’s departure in 2019. Mulvaney also serves as the Director of the Office of Budget & Management, a position he will reportedly also be vacating. Mulvaney will reportedly be assisting Meadows on the first few weeks of his new job.

President Trump made the announcement on social media writing,

“I am pleased to announce that Congressman Mark Meadows will become White House Chief of Staff. I have long known and worked with Mark, and the relationship is a very good one….

….I want to thank Acting Chief Mick Mulvaney for having served the Administration so well. He will become the United States Special Envoy for Northern Ireland. Thank you!”

Congressman Meadows released a statement on his appointment writing,

“This President and his administration have a long list of incredible victories they’ve delivered to the country during this first term, with the best yet to come — and I look forward to helping build on that success and staying in the fight for the forgotten men and women of America…

…In particular, I want to recognize my friend Mick Mulvaney. Mick is smart, principled, and as tough a fighter you’ll find in Washington, D.C. He did a great job leading the President’s team through a tremendous period of accomplishment over the last year-plus…

Lastly, I want to thank the people of western North Carolina. Serving you in Congress has been the honor of my life. It may be in a different role, but I’ll continue working every day to deliver results for you — and main street Americans all over the country — in the months and years to come.”

High turnover is common for the White House Chief of Staff position. Former President Barack Obama made five appointments to the position during his eight years in office, finally settling on his fifth appointment who served the President for more than four years.