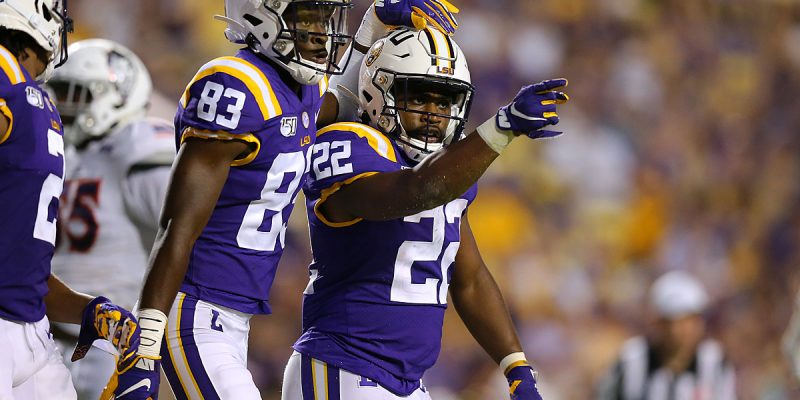 Now the former LSU standout is receiving praise from that very NFL star, as well as from others after his performance at the recent NFL Scouting Combine.

“I think he’s a special back,” said Ingram, the former Alabama and Heisman winning tailback. “He’s the prototypical running back–size, balance, speed, agility. He’s able to catch the ball coming out of the backfield. He had a huge year for LSU. I admire his game.

“He reminds me a lot of myself, especially when he was rocking the 22 down there in Louisiana. He has a long, promising future ahead of him. I’m rooting for him.”

I knew I was onto something with that “Catch 22” article on February 12.

Edwards-Helaire ran a 4.61 unofficial 40-yard dash in his first attempt at the Combine. On his second, he clocked in at 4.62. He also recorded a 39.5-inch vertical jump, which ranked in the top three among running backs. Then he registered a 10-plus foot broad jump, which was the sixth-best jump in the position group.

Just as a comparison, here are the respective broad jumps for LSU backs recently drafted.

Clyde Edwards-Helaire (@LSUFootball) runs a 4.61u 40-yard dash on his first attempt. @Clydro_22

Pro Football Hall of Famer LaDainian Tomlinson also had nothing but high praise for the 5’7 rising star out of Baton Rouge.

“Clyde Edwards-Helaire was as advertised. He’s right there as the No. 2 running back. I thought he was great,” Tomlinson said during an appearance on NFL Total Access. “The lateral movements that we talk about. Here’s a guy that’s an all-purpose type of guy. He can do a little bit of everything. Just look at the tape. Look at the lateral movement. It’s so good. He’s short and compact and has a low center of gravity when he runs, and then he has a burst through the whole that you really love. He gets up to the defenders so fast. Catching the ball out of the backfield is something we really wanted to see, and it was as advertised today.”

NFL analyst Ryan Sakamoto had Edwards-Helaire ranked even higher than Tomlinson. He posted on Twitter:

“Clyde Edwards-Helaire is the real deal IMO. He was my No. 1 rated RB and for good reason. Like I said months ago, he reminds me a lot of Mark Ingram. And running in 4.6 today is a win in my book! His heart outweighs his height.”

Even midway through the 2019 season, it seemed unlikely that Edwards-Helaire would be drafted any higher than the later rounds. It didn’t even seem likely that he would be good enough to forgo his senior season to enter the draft. Many fans in Baton Rouge were clamoring for one or both of the two highly touted freshman running backs–Tyrion Davis-Price and John Emery Jr–to get more playing time ahead of the veteran. But after a breakout game against Alabama, the diminutive back was larger than life, joining Joe Burrow and Ja’Marr Chase as the Tigers’ most important offensive weapons.

He was named LSU Football MVP, landed on the All-SEC First Team as a unanimous pick, and was a finalist for the Paul Hornung Award honoring the nation’s most versatile player.

Now, the player who fumbled against Vanderbilt and was thought to be too weak and slow to keep two stud freshmen off the field is being viewed by many as the best running back available come April.

“Ultimately, me believing in myself, I feel like I am the running back in the draft. It’s as simple as that,” Edwards-Helaire said. “I feel like I can do everything. I feel like I have the most tread on my tires. I didn’t have the 800, 900 carries as far as my career, but for the most part, everything that needed to be displayed was something that was done.”

Now add this explosive performance at the NFL Combine, and a young local kid with quite a story behind him is a safe bet to be gone on day one when the draft rolls through Las Vegas in April.