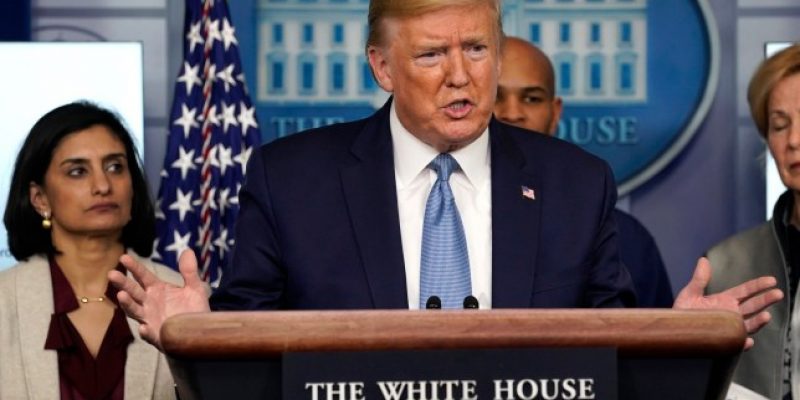 President Donald Trump is negotiating a stimulus package that would give every adult American a $1,000 check after signing the Families First Coronavirus Response Act Wednesday.

It materialized after Trump held a phone meeting with 130 CEOs to hear directly what they need to respond to this crisis.

The bipartisan bill is the second legislative package passed by Congress to address the COVID-19 outbreak. The first coincided with Trump invoking the Defense Production Act. It directed $8.3 billion to FEMA, federal health agencies and first responders. Under the first bill, the Department of Defense “massively expanded medical resources,” making 5 million respirator masks and 2,000 ventilators available for use, the White House reported.

FEMA is now activated in every region of the country and at the highest level, Level One. The Department of Housing and Urban Development has suspended foreclosures and evictions until the end of April. The Department of Health and Human Services has also suspended foreclosures and evictions. Two Navy hospital ships are being deployed to impacted areas, one on each coast. The U.S. also halted all non-essential travel along the northern border with Canada.

The Trump administration is also negotiating a third bill, a $1 trillion economic stimulus package to assist small businesses, restaurants, and airline companies. It will also include cash payments to every American within approximately 9 weeks, Treasury Secretary Steve Mnuchin said Thursday.

The $1 trillion package would give every adult American $1,000, in addition to $500 for each dependent. A family of four, with two parents and two children, would receive $3,000, for example.

“This is an unprecedented situation, where for good reason the government has instructed major parts of the economy to close down so that we can win this fight against this virus,” Mnuchin told Fox Business News. “While we’re doing that, we understand there are impacts on hard-working Americans, and the president is determined to support them.”

Cash payments account for half of the bill’s overall spending.

Approximately $300 billion would go toward aid for small businesses, payroll and loan forgiveness.

Roughly $200 billion would go toward lending to airlines and other critical industries impacted by limited travel due to the virus.

The bill is the third, and largest, in the government’s response to coronavirus.