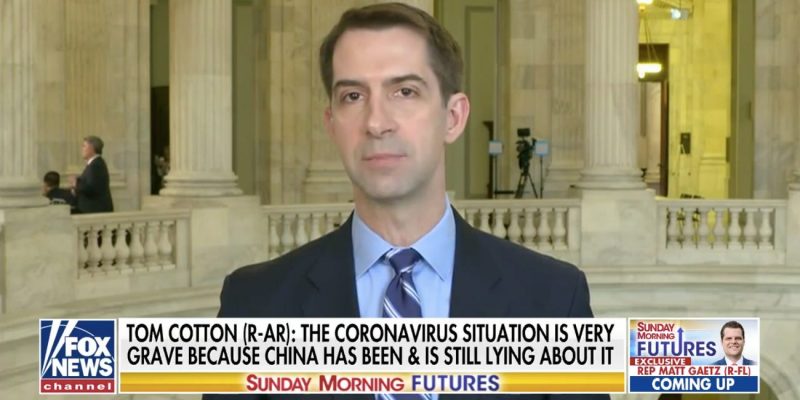 Over a month and a half ago, in the middle of February, Republican Senator Tom Cotton was raising some valid questions.

And the mainstream media destroyed him for it, smearing him as a conspiracy theorist.

From Fox Business on February 16:

“The situation is very grave in part because…China was lying from the beginning, and they’re still lying today,” Cotton said. “And also because there are so many unknowns about this virus. For example, how many people one person can infect once they have the virus.”

“An ounce of prevention is worth a pound of cure, to quote Benjamin Franklin, and why the president was so smart to ban travel coming from China just a couple weeks ago so we didn’t have more than 20,000 people landing in our country every single day from mainland China.”

“This virus did not originate in the Wuhan animal market. Epidemiologists who are widely respected from China who published a study…have demonstrated that several of the original cases did not have any contact with that food market. The virus went into that food market before it came out.”

“We also know that just a few miles away from that food market is China’s only biosafety level 4 super laboratory that researches human infectious diseases. Now we don’t have evidence that this disease originated there, but because of China’s duplicity and dishonesty from the beginning we need to at least ask the question.“

There should have been nothing controversial about this. Cotton addressed both the lack of evidence at that point, and the fact that China was being duplicitous. He was raising legitimate questions. And now those questions are becoming more and more plausible, as even many in the mainstream media, including commentators at the Washington Post, are now finally coming to grips with it.

“scientists don’t rule out that an accident at a research laboratory in Wuhan might have spread a deadly bat virus that had been collected for scientific study,” writes @IgnatiusPost https://t.co/Sormfr4PXy

Senator Cotton was far ahead of the drama. Way back on January 22, he was warning everyone that the coronavirus had its sights set on America. January 22—just one day before the Chinese government started its own quarantine of Wuhan.

Of course that’s when the media really went to work on its distortions and smear campaign.

Sadly, Congress was embroiled in the Democrats’ witchhunt impeachment proceedings at this time. It was the only thing the news wanted to air, as the trial lasted from January 16 to February 5.

When the first classified briefing on the virus was held in the Senate on January 24, two days after Cotton’s first warning, only 14 senators reportedly showed up.

Fast forward to April, and now outlets are publishing the very things Cotton insisted on from the very start. What was once a “debunked conspiracy theory” has become some of the substance of their news and profits.

Senator Cotton should be highly commended for his insight and courage. He is owed a number of apologies, many, many times over. But it is doubtful he will ever get them.