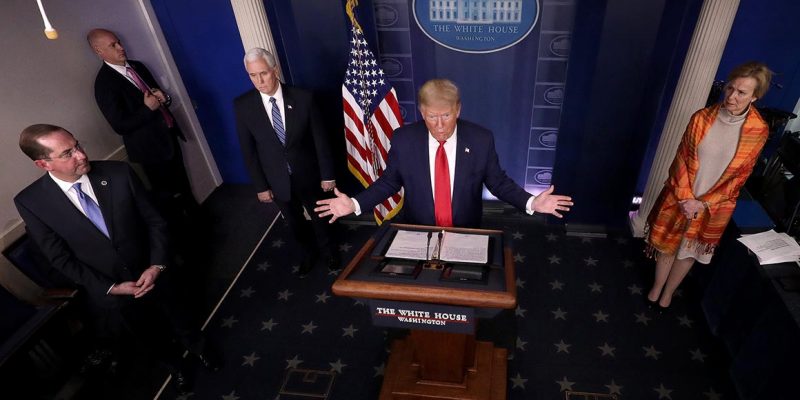 Many Americans are itching to get back to work, for businesses to reopen, for the economy to experience an Easter season resurgence.

Hopefully the executive players of both the federal and state governments will cooperate in making this happen.

Otherwise we may very well continue to see the slow deterioration of the freedoms we’ve always taken for granted.

President Donald Trump, who has often championed states’ rights during his term, doesn’t seem to agree this time. At Monday’s press briefing on the coronavirus pandemic, he announced that, concerning public social distancing guidelines and business closures, it is his decision.

“They will agree to it,” Trump said of the governors. “But the authority of the President of the United States, having to do with the subject we’re talking about, is total.”

“Having to do with the subject we’re talking about” is possibly the key context here, which I will return to later in this article.

His comments came after he tweeted this earlier yesterday morning:

For the purpose of creating conflict and confusion, some in the Fake News Media are saying that it is the Governors decision to open up the states, not that of the President of the United States & the Federal Government. Let it be fully understood that this is incorrect….

Rep Liz Cheney, a Republican from Wyoming, is challenging the President, saying it is not in fact his exclusive decision to open states back up for business again.

“The federal government does not have absolute power,” Cheney posted on Twitter shortly after the briefing, citing the 10th Amendment of the Constitution:

The federal government does not have absolute power.

Wyoming is one of the few states that never implemented a stay-at-home order amidst the coronavirus pandemic. It was the nation’s individual governors who made the decisions to shut down their respective states’ businesses and institutions, not the President. According to the Constitution, it is up to them to open them back up, said Judge Andrew Napolitano.

The judge, however, did add that he believes the nation’s governors unfortunately mandated a lifestyle that took away from their constituents’ civil liberties in the first place.

“We are witnessing the slow death of civil liberties in the name of public safety,” Napolitano said on Fox & Friends. “When a drone hovers over you, that is surveillance, and surveillance is a search. This is not me. This is the Supreme Court. A search can’t go on without a search warrant.”

Trump may be dead wrong to cite fake news in a tweet on this issue, but if governors are slow-playing economic recovery, or arresting citizens for little to no reason whatsoever, as we’ve seen several times in overreactions across the country, it all will inevitably turn back on the President. Everything does in this world of polarized politics. The President knows this, and perhaps this is why he appears to be taking such a hardball approach to getting the country open again.

Perhaps this developing drama has just as much to do about basic freedoms as it does economics.

For the President’s sake, I hope the governors come aboard quickly. Because if he fights them on this, especially with the same language he used yesterday, it could be a very bad look for him, despite what is likely the right intentions for the American people.

Hopefully enough Americans are paying attention. As Laura Ingraham commented on Twitter yesterday under Trump’s post, “Governors who keep their states shut down longer than is absolutely necessary will find their authority challenged in court.”

Perhaps, too, Trump is simply using poor word choice and needs to be more tactful in his approach. It is nothing new for a President to use executive power, but Trump’s words can come across as tyrannical for a media and polarized public looking to “get” him at every turn. As Napolitano states, both the President and Congress can leverage the power of money to get states to bend to their will.

“If Congress were to say to Governor [Andrew] Cuomo, here is $100 million to supplement the loss of your state tax revenue. In return, open up Yankee Stadium and open up Broadway, he probably would take the money to do that,” said Napolitano.

COVID-19 is a drama that has more plot twists than a Shakespearean tragedy. President Trump is right in taking legitimate steps toward opening up America for business again. Freedom is on the line. Let’s just hope all the players on stage cooperate.