So-called pro-life John Bel Edwards has allowed a Shreveport abortion clinic to remain open, allowed a Baton Rouge clinic to re-open and, while Baton Rouge police harass protestors outside the clinic, John Bel allows abortions to go on inside the clinic in direct violation of his Department of Health’s order that all non-emergency procedures cease.

First, a bit of background will be helpful.  You may recall that, 9 days ago, we ran an article on the Shreveport abortion facility (June Medical Services d/b/a Hope Medical Group) remaining open despite clear directions from the Louisiana Department of Health that medical providers cease all non-emergency medical procedures.  Later that day Rep. Gabe Firment fired off a letter to LDH inquiring about the issue as did Sen. Jay Morris.  Sen. Beth Mizell wrote on her Facebook, “As we struggle to have sufficient PPE for those fighting Coronavirus in the front lines, could the abortion clinics in Louisiana stop their non essential work in killing the unborn. The PPE they are using could save lives.  Other states have prohibited them from operating during this time.”

The people of Louisiana are sacrificing their freedom and economic well-being to stay home and slow the spread of COVID-19, but abortion clinics in Shreveport and Baton Rouge are conducting business as usual. President Trump has recommended, and the state of Louisiana has implemented, a policy of social distancing to reduce the risk of exposure, but they refuse to stop performing these nonessential procedures. As a doctor and a member of Congress, I am outraged by this flagrant disregard for public health and I believe they should close immediately.

Over at the Governor’s mansion, crickets.  Governor John Bel Edwards, who loves to give press conferences extolling the doom which has or may shortly befall the Great State, has made no attempt to shut the Shreveport clinic down.  The abortion clinics took the Governor’s silence as permission, and the Delta Clinic in Baton Rouge, which had previously shut itself, promptly reopened for business.  Which brings us to this guy: 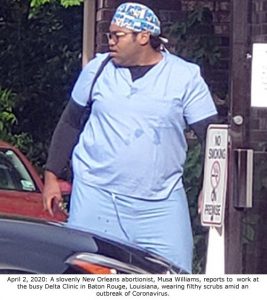 According to a story today by Operation Rescue, this guy, Musa Williams, an intern at the LSU Med Center in New Orleans, travels from the Crescent Coronaville to conduct abortions at the Delta Clinic in Baton Rouge.  And, according to the site, this his how he appeared on April 2, 2020 when he showed up to conduct said abortions.  The site claims that Williams and another Delta abortionist, Nsikan St. Martin, gave abortions to about 30 women that day in those filthy scrubs.

This, of course, could all be prevented if the Governor would simply order his Department of Health to shut these abortionists down.

Texas Governor Greg Abbott issued a similar order in Texas prohibiting all non-essential medical procedures.  The abortionists sued and yesterday had their hat handed to them by the U.S. Fifth Circuit.  The Court wrote,

To preserve critical medical resources during the escalating COVID-19 pandemic, on March 22, 2020, the Governor of Texas issued executive order GA-09, which postpones non-essential surgeries and procedures until 11:59 p.m. on April 21, 2020.

Despite this approval from the U.S. Fifth Circuit, Edwards continues to maintain radio silence on the issue, despite having ran on a pro-life platform in his campaign last year.  (See here for an Advocate piece on JBE’s pro-life stance)

Instead of the State Police shutting down Louisiana clinics, the Baton Rouge Police are busy harassing the praying pro-life demonstrators outside the clinic.  In a picture posted in that Operation Rescue article, it appears 3 or 4 police officers were summoned to harass one demonstrator clad in masks and gloves (while Mr. Williams apparently performed abortions inside dressed like Hannibal).

In Louisiana police will ticket or arrest you for having church, harass you if you demonstrate against abortions, but do nothing to stop an abortion clinic in direct violation of the Louisiana Department of Health’s orders.  All while Governor Edwards watches from the Mansion.

John Bel Edwards has a clear-cut opportunity to save lives by temporarily closing these abortion clinics.  His steadfast silence and refusal to do so speaks volumes to his intentions and positions.  Some pro-life governor we have.