We’re going to make a prediction here, and it’s one we probably shouldn’t make based on what we know about John Bel Edwards. Our prediction: on Monday, or maybe Tuesday, he’s going to announce he’s reopening the state of Louisiana on an accelerated schedule as opposed to that May 15 date he caused such a stir about on Monday.

We’re predicting that despite what we know about Edwards and how he operates. One thing true about him is he is one of the most bullheaded, my-way-or-the-highway operators Louisiana has ever had in public office. Everything about him rejects compromise or cooperation of any kind. His experience is as a trial lawyer, and from that what you get with Edwards is an attempt to make those opposed to him as uncomfortable and intimidated as possible so they’ll bend to his will. He also was a lieutenant in charge of a rifle company in the U.S. Army, and the lessons one learns about leadership in a job like that are that orders come down from above and they are followed, and no opposition or questions are tolerated.

There are lots of examples of how this has played out during his time as governor. His first huge mistake came even before he was inaugurated. He had a Republican legislature bound and determined to elect a Republican House Speaker, and the House Republican delegation told him so – but they asked him to submit three names of third-term Republican House members he would be comfortable with in the job and they’d pick from that list. Instead, Edwards backed a Democrat, Walt Leger, and proceeded to create legislative independence for essentially the first time in the state’s history.

A more recent example came last year, when Edwards had railed against Attorney General Jeff Landry’s having joined a score of other states in asserting that Obamacare was unconstitutional. Edwards declared that if the Supreme Court agreed, then hundreds of thousands of Louisianans with pre-existing conditions would lose their health insurance. So Landry got together with legislative leaders and Insurance Commissioner Jim Donelon and crafted a bill that would remedy the problem in the likely event Obamacare went down in flames, and Edwards railed against that. The bill proceeded to pass with an overwhelming margin over Edwards’ objections, and he was reduced to later taking credit for having signed it. The state’s media failed to accurately report it, and Edwards’ opponents didn’t capitalize on the messaging opportunity the embarrassment gave them, but it was a fiasco nonetheless.

So we’re making this prediction counter to what we know about Edwards.

Because it’s starting to become obvious that he can’t control the state’s virus response much longer as he’s done for the past five weeks.

Lafayette has begun staging a local reopening of its economy. West Carroll, East Feliciana and West Feliciana Parishes have gone even further. In West Feliciana, parish president Kenny Havard is openly defying the governor, which is interesting because when Havard was a state representative a couple of years ago he was one of Edwards’ more compliant Republicans. There was this…

Under the new guidance, restaurants would be allowed to operate at 25% capacity. That includes tableside service.

Other businesses like the numerous boutiques in the parish must maintain no more than 25% occupancy. However, the number of people inside cannot include more than 10, including employees, and everyone must wear some type of personal protective equipment.

“We ask that you continue to be patient and help protect the most vulnerable among us. This can be done by wearing a mask when in public and washing your hands often,” Havard said.

Anyone 65 years of age and older or who have existing health conditions is being urged to shelter at home.

“A very small portion of it may be at odds with what he’s thinking,” Havard said. “I consider him (Gov. Edwards) a friend of mine and I think he’s doing a wonderful job with what he’s trying to do. Problem is every situation is unique and to try and lump west Feliciana in with Baton Rouge or New Orleans, it doesn’t work for us.”

According to the parish president, businesses could reopen as soon as they can meet the guidelines set forth by his office. Havard said he expected most would be open by next week.

And this, after Edwards’ executive counsel Matthew Block griped about what West Feliciana is doing…

“The governor thinks its OK to stand in line at Tony’s Seafood in Baton Rouge shoulder to should with people for 30 minutes to get food but not sit at a restaurant table with plenty of space and get served,” Havard said. “It’s not a one size fits all.”

Havard, a Republican who supported the Democratic governor’s reelection bid and served with Edwards when both were in the state House of Representatives, said his parish hasn’t had a case of COVID-19 since April 12.

He said he spoke with the governor’s executive counsel Matthew Block about his decision, which Havard said was reached with other parish leaders.

“I told him if he felt like he had to shut us down then he should come on up here and enforce it,” Havard said.

Remember, Havard is actually one of the friendlier Republicans to Edwards.

Less-friendly Republicans to the governor are in the legislature working on a petition to force an end to his economic shutdown, and we’re told that petition has enough commitments, if not actual signatures, from House members to go into effect. When the legislature resumes its session on Monday, those signatures will be taken and that process will begin.

Then you have Landry’s letter to Edwards today, which warns him that if he doesn’t allow a reopening of churches across Louisiana, pastors and parishioners will begin widespread civil disobedience and he’s going to have a circus on his hands… 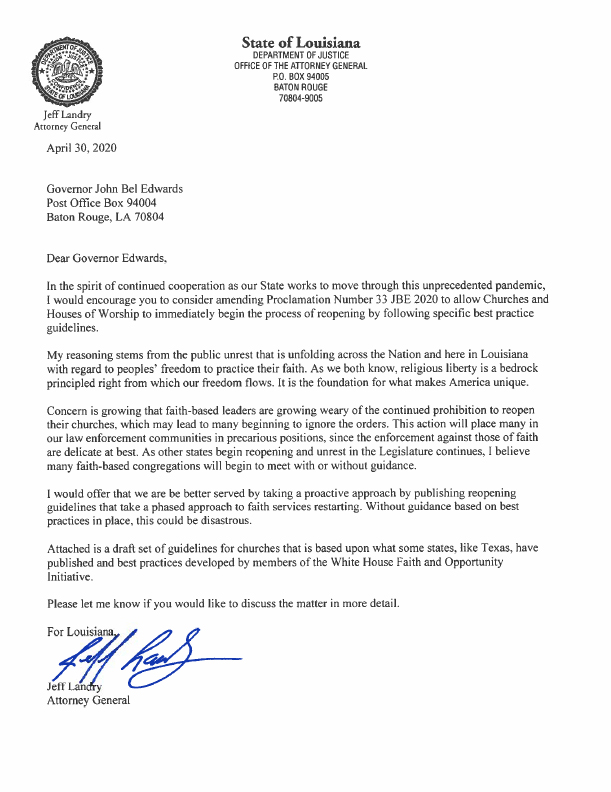 Additionally, President Trump was on the Moon Griffon show this morning, and during that appearance the President said he’d like to see a parish-by-parish approach to reopening Louisiana. That was a significant slap in Edwards’ face after he’d been in Washington yesterday meeting with Trump and trading platitudes over the response to the Wuhan virus.

And there are the businesses reopening, arguably in defiance of the governor’s order. Calloway’s Health and Fitness in Baton Rouge, which announced they’re reopening on Friday, is an example. There will be lots more.

What we’re going to bet is that by Monday you will have seen several more parishes declare themselves reopened, you’ll see some churches hold services this weekend in defiance of the governor’s order, there will be a protest on Saturday in front of the governor’s mansion demanding the reopening of the state and then he’s going to face the prospect of the legislature taking his emergency declaration away from him altogether when they return to the Capitol.

Edwards doesn’t like bowing to pressure. But we’re going to predict he will this time, because reality is beginning to set in. The state’s virus numbers, which Edwards controls and which have been suspect all along, can’t be massaged anymore to show that Louisiana is still under threat of having its healthcare system overloaded, and popular sentiment is turning against his shutdown.

If he continues on his current path he’s going to get run over. We predict he’s going to find some way to save face and on Monday he’s going to announce he’s reopening Louisiana sooner than May 15.