…through civil and political means. Yesterday’s announcement that Louisiana remains under house arrest, with minor exceptions, until May 15 was clear proof of that.

Louisiana residents are in for two more weeks of the stay at home order.

Governor John Bel Edwards says its needed to get the state to meet phase one criteria to reopen, but he did relax some of the restrictions.

Edwards did announce some changes at the end of next week. Restaurants can open outside areas for meals without table service.

There will be three changes to the stay-at-home order that will go into effect on May 1:

· Outdoor sections of restaurants will be allowed to reopen. However, there will be no table service.

· While malls will remain closed, stores at those malls will be allowed to offer curbside retail.

· All workers who interact with the public must wear masks.

After monitoring key areas over a 14-day period, Edwards says we simply don’t meet the criteria to move into phase one of reopening the economy.

He says we don’t have consistent decreases in new cases and new hospitalizations across the state’s nine regions.

A third of the state’s regions are still seeing an increase in case counts.

This was a pretty serious change from what Edwards was telling legislators last week. Last week House Speaker Clay Schexnayder had circulated word throughout that body, after several members began talking about the need for reopening the state, that Edwards had all but guaranteed a May 1 reopen. There was also a call last week at which the governor addressed the Republican House delegation and he repeated his promise to open the state on May 1. So it wasn’t just Schexnayder he lied to, it was everybody.

Reaction to Edwards’ announcement yesterday from the other side of the political fence largely consisted of grumbling, but not the clear outrage it should have engendered. LABI’s statement…

“We are obviously disappointed in today’s decision. Essential service industries such as groceries, hardware, maintenance and construction have operated safely and productively for weeks now and have shown us all that smart steps can be taken to protect the public AND serve the public at the same time. Right now, other small businesses are simply asking for the same right to show they too can operate safely and responsibly to serve their community and hire back their workers. Throughout this unprecedented crisis, Louisiana’s business community has been a good-faith partner for the state, aiding our neighbors and acting in the best interest of public health at great sacrifice. Every one of the 350,000 lost jobs represents a family that needs income and stability in both the short and the long term. Flattening the curve has taken a team effort by everyone, an effort we all can be proud of. Rebuilding this economy will be just as monumental of a team effort. We hope state officials use this additional time to develop a robust and targeted plan that gives clear safety guidance going forward and takes bold actions to jump start our badly damaged economy. We will need both to overcome this and we will need it soon.”

And one from the Pelican Institute…

“Hundreds of thousands of Louisiana families continue to suffer each day we delay reopening the state’s economy. It’s past time to get Louisiana working, and we strongly urge the Governor and all of our elected officials to treat the worsening jobs and economic crisis with the same urgency as the ongoing COVID-19 health crisis.

Because we’re dealing with incomplete data, there are no absolute right or wrong answers to these critical problems. We do know, however, that countless workers and families are suffering, and we need to get Louisianans safely back to work as soon as possible.”

The legislature was pretty clear in its determination not to be bound by Edwards’ continuing house arrest order; a statement yesterday revealed they’re planning to resume their session on Monday, May 4, though some Democrats are now saying they won’t be there. 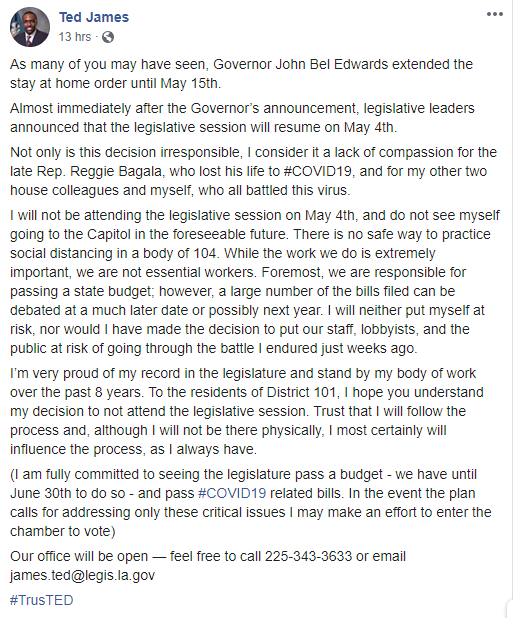 There is a petition circulating in both the House and Senate, as we understand, which seeks to strip the governor of his emergency declaration. The legislature has the power to do that with a majority vote in either house. They aren’t there yet as of this writing, but it’s likely that by this afternoon they will be, according to legislators we’ve talked to. There are names on the petition already which one would not have expected.

And Schexnayder, we’ve heard, is furious.

Feelers have been put out to the state’s Congressional delegation to get a ruling on whether revoking Edwards’ emergency powers would jeopardize Louisiana’s federal relief and recovery dollars. So far, we’re told, Congressional staffers have found nothing in the CARES Act which would make Louisiana’s appropriations contingent on having a state emergency declaration in place.

Should the legislature override Edwards, Louisiana would be back to normal, legally. That wouldn’t necessarily mean everyone would go back to work or that there wouldn’t be a phased reopening of the state. What it would mean is the people of Louisiana, armed with all the information and experience of the past six weeks, would be in a position to decide for ourselves what precautions and actions we would be able to take. It’s clear that some businesses could reopen immediately without restrictions, while others might want to be more careful about how to operate.

But you shouldn’t bank on the Louisiana legislature, though if you want your liberty back you should call your senator or representative and make that clear. In the event John Bel Edwards’ hands remain around the throat of Louisiana’s economy despite the fact there is no clear reason to justify such an order, as it was instituted for the purpose of keeping the healthcare system from being overloaded with Wuhan virus patients and it’s been clear for weeks that was not going to happen, it might require civil disobedience to dissolve his emergency declaration. If businesses choose to reopen en masse, there simply are not enough law enforcement officials to punish them – and that’s assuming local sheriff’s departments and police forces are even willing to enforce an order which is quite arguably unconstitutional in any event.

And no, don’t be suckered into thinking “it’s just two more weeks.” Edwards lied about a May 1 reopen; there is no reason to believe he will tell the truth about a May 15 reopen. He’s lied from the start – not just about the virus, but about everything having to do with running the state of Louisiana. This is not about public health and it never has been. It’s about how much longer this man is allowed to control the movements and commerce of the people of this state.

He can’t be allowed that control any longer. That’s clear. There must be consequences to this kind of abuse of power.