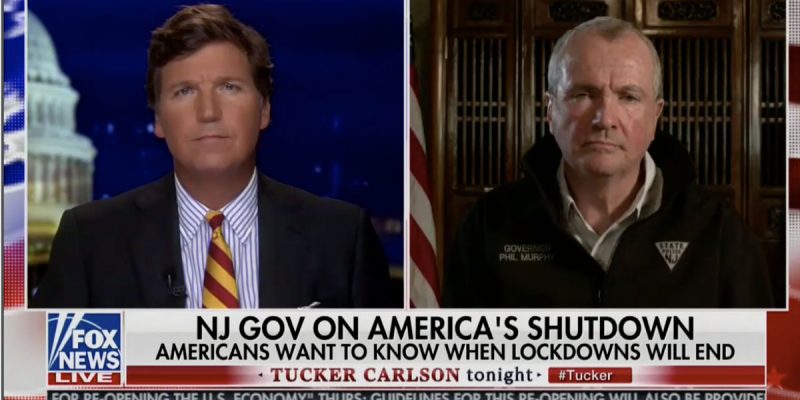 By now you’ve probably heard about Tucker Carlson’s interview with New Jersey Governor Phil Murphy (D).  But just in case you haven’t, I’ll briefly summarize the incident that sparked the interview as well as the quote that’s generating all the notoriety.

Fifteen people were charged with violating Governor Murphy’s ban on gatherings at the funeral of Rabbi Chaim Moshe Strulovic in Ocean Springs County, New Jersey.  Governor Murphy then agreed to be interviewed by Tucker Carlson, and the following exchange occurred:

“The Bill of Rights, as you well know, protects Americans’ rights — enshrines their right to practice their religion as they see fit and to congregate together to assemble peacefully.  By what authority did you nullify the Bill of Rights in issuing this order?  How do you have the power to do that?”

“That’s above my pay grade, Tucker,” the governor replied. “I wasn’t thinking of the Bill of Rights when we did this.”

“We looked at all the data and the science and it says people have to stay away from each other.”

“I, _____, elected governor of the State of New Jersey, do solemnly promise and swear, that I will support the Constitution of the United States . . .”

I am certain that variations of this occur in every state’s oath of office.  The point is clear: considering and supporting the constitution is the primary function of any governor.  He or she literally swears to support the constitution when they begin their duties.

Even if you believe that governor’s decisions should be driven by scientist’s opinions, modeling and data projections, let me ask you a few simple questions.  Can medical doctors and scientists declare a legally enforceable ban on gatherings?  Can a doctor or scientist close business, bars, restaurants, hair salons and countless other businesses?  Of course not, and you’re probably surprised I even asked.  Everyone knows that these powers belongs to state governors.  The governor, and the governor alone, has the authority to issue these orders (assuming, of course, that said orders are constitutional).  It’s well known that every ship has just one captain, and the buck has to stop somewhere.

Let’s compare and contrast Governor Murphy’s actions with Governor John Bel Edwards.  Governor Murphy, as just pointed out, didn’t consider the constitution when issuing his ban.  Governor Edwards had Louisiana’s Attorney General, Jeff Landry, come to the podium to assure the people that Edwards did, in fact, have the constitutional authority to issue his ban on gatherings.

It’s no secret that Attorney General Landry and Governor Edwards have frequently locked horns.  They have had numerous clashes over both politics and state policy ever since they both assumed office in 2016.  Yet both men put aside their political differences to close ranks in a time of crises, and neither man forgot the constitution.

Even if Governor Edwards and Attorney General Landry’s opinions were in error and the United States Supreme Court were to rule, at some time in the future,  that some of the Governor’s orders or bans were unconstitutional, Governor Edwards is not in violation of his oath.  The oath does not require governors to be perfect, because people, even governors, can interpret things differently, but the oath does require that the constitutionality of decisions be considered.  Governor Murphy broke his oath and then claimed it was above his pay grade.

Governor Edwards consulted his attorney general and they put aside bi-partisan differences to work together to help the citizens of Louisiana.  Like Jeff Landry, I’m a conservative that has often criticized John Bel Edwards, but I pride myself in giving credit where credit is due.  Governor Edwards (like Attorney General Landry) has put political differences aside to work with President Trump, and he is not the only liberal governor to do so.

This crisis has shown us that some leaders (both conservative and liberal) have risen to the occasion, closed ranks, and worked for their citizens.  It has also shown us that some leaders, especially in the United States Congress, have revelled in partisan politics and stuffed the emergency relief bills with a staggering amount of pork.  Let’s hope the voters remember which elected officials have shown leadership and which have not.

John Mason is an occasional contributor.  He is running for the Jefferson Parish Republican Executive Committee.

Interested in more national news? We've got you covered! See More National News
Previous Article It’s Clear JBE Won’t Willingly Return Your Liberty; You’ll Have To Take It From Him…
Next Article NELSON: Why I Signed The Petition To Override JBE’s Emergency Declaration