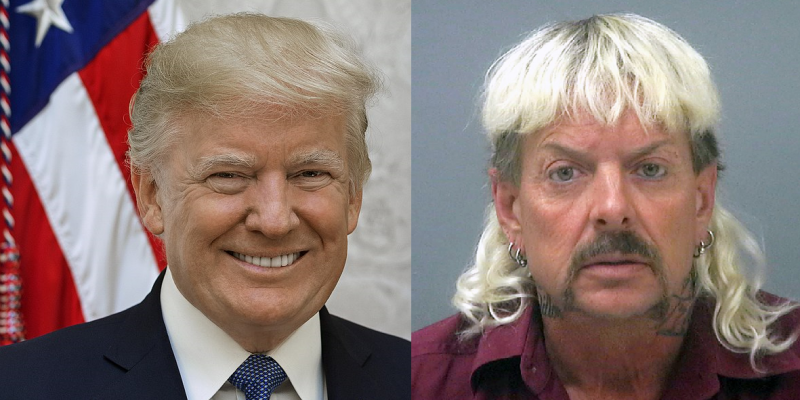 The seemingly endless rabbit-hole that is the world of “Tiger King” has taken a new turn.

For those unfamiliar with Tiger King, it is currently the number one streaming documentary series on Netflix exploring the bizarre world big cat private zoo owners, each of which profiled seemed to be a dirty rotten scoundrel. The series starts out with profiling Joe Exotic, who was the owner of the Greater Wynnwood Exotic Animal Park which was also known as the G.W. Zoo in Oklahoma. The documentary quickly showcases that Joe Exotic is a gay polygamist, marrying not one but two husbands simultaneously, later to be reviewed neither one of Joe’s husbands were actually homosexuals.

Joe is contrasted with “Doc” Antle, who is the owner of the Institute of  Greatly Endangered and Rare Species in Myrtle Beach. The series alludes that Doc Antle’s zoo also happens to be a sex cult.  Doc Antle and Joe Exotic’s common enemy is Carole Baskin, owner of Big Cat Rescue in Florida. Joe Exotic accuses Carole Baskin of running a cult of her own with regards to her volunteers and even accusers her of Killing her first husband, Don Lewis. A sentiment also echoed by Don Lewis’s first wife, their family, and even OJ Simpson. Joe Exotic felt that Don’s murder was financially motivated since Don was worth millions and was about to divorce Carole. Joe would constantly pick fights in the media with Carole including threatening to take his modern sporting semi-automatics rifles down to Florida to deal with her, to which Carole sued Joe Exotic for $1 million over trademark infringement and won.

This is where Joe brought in some shady business partners to try to bail him out financially, especially after apparently embezzling zoo funds on his failed run for Oklahoma Governor as the Libertarian Candidate. Jeff Lowe a convicted felon and alleged con-man who apparently tricked Joe Exotic into selling him the assets of the G.W. Zoo to keep them out of Carole Baskin’s hands. Jeff brought on his handyman Allen Glover in which Joe Exotic allegedly offered $5000 to kill Carole Baskin in a murder for hire plot. The key witness being James Garretson who was a former strip club owner turned government informant after he was screwed financially in dealings with the G.W. Zoo which lead to Joe Exotic and only Joe Exotic being charged let alone convicted of the murder for hire plot along with multiple cases of animal abuse.

After Tiger King premiered on Netflix in March 2020, Those that greeted Joe Exotic’s wikipedia page were greeted with a blurb where Joe Exotic is hoping for a pardon of his 22 year sentence in federal prison from President Donald Trump.

No one initially thought there was any merit to this, until Donald Trump Jr. appeared on Jim Norton & Sam Roberts radio program on SiriusXM and said he would ask his dad just to get the media reaction. Now apparently President Trump will “take a look” into whether a pardon is warranted. It just seems really odd that only Joe Exotic was charged with anything considering that the documentary seems to paint  Jeff Lowe having more to do with the murder for hire plot that Joe.

That Doc Antle stated there is no way any assassin for hire would work for less than $100k, and supposedly Allen Glover did not go through with the plot because Joe Exotic only paid him $3,000. As stated above pretty much everyone profiled in this documentary seems to be dirty rotten scoundrel they all should be in prison, especially with the mountain of evidence seemingly indicated that Carole Baskin killed her husband to collect on his estate.

Let’s just hope that more important pardons of General Michael Flynn and Roger Stone take precedence over Joe Exotic. Also don’t be surprised that Carole Baskin will not appear in the followup documentary.