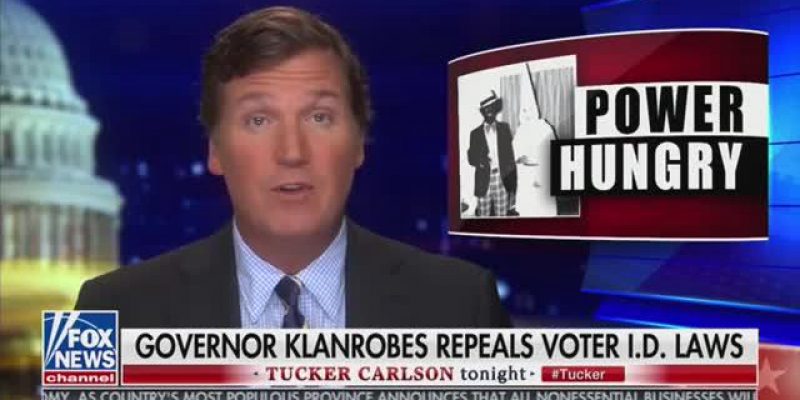 All of this is so very “ungood,” as George Orwell in the prophetic novel 1984 would say.

“Don’t you see that the whole aim of Newspeak is to narrow the range of thought? In the end we shall make thought-crime literally impossible, because there will be no words in which to express it. Every concept that can ever be needed will be expressed by exactly one word, with its meaning rigidly defined and all its subsidiary meanings rubbed out and forgotten…. The process will still be continuing long after you and I are dead. Every year fewer and fewer words, and the range of consciousness always a little smaller.”

In today’s America, “today” meaning an alarmingly growing number of years, one of those Newspeak words is “racist.”

“Government IDs aren’t racist,” Carlson said, arguing against a hackneyed yet popular claim on the Left. “They’re mandatory. You can’t live here without one…. Pretty much every person in America has a government ID.

“And in fact, in February 2019 a paper coauthored by professors at Harvard and the University of Bologna found that voter ID laws had no effect whatsoever on voter turnout for any subgroup they measured—whether it was by age, or gender, or party or yes, by race. This is a complete and utter crock.”

Carlson began his show “Tucker Carlson Tonight” on Tuesday with a monologue spotlighting those, including Democratic Gov Ralph Northam, who consider the coronavirus pandemic a political “opportunity,” and pointed out one opportunity in particular that ought to worry every American citizen, even if they do not live in Virginia.

“With his signature, Klanrobes eliminated all of Virginia’s voter ID laws. He signed legislation that allows residents to vote up to 45 days before an election, for any reason. There is also automatic voter registration for anyone using the state’s DMV, including those who do it online.”

Northam is clearly trying to use his power to make sweeping changes while a “beleaguered and distracted population,” as Carlson put it, is not paying attention to the permanent, dangerous political moves many Democrats are attempting to make.

Said Northam back in January, “Participation makes our democracy strong—we should encourage every eligible voter to exercise this fundamental right, rather than creating unnecessary barriers that make getting to the ballot box difficult.”

Ahhh,  Newspeak. It is always couched with such virtue. It banks on unwitting Americans reading it and thinking, how could anyone possibly oppose that?

Oh, Republicans do? Let’s hate them.

Oh, Trump does? Let’s destroy him.

“Democrats would like to see that system come to your state—to every state—and they’re using the coronavirus pandemic to justify it. ‘IDs are racist!’” he mocked. “Expect to hear a lot more of that lie.”

It’s a narrative made up of carefully selected, deceitful, dangerous words, a conjured storyline that seems to be squeezing the time and patience of any un-bad American who is paying attention.

Interested in more national news? We've got you covered! See More National News
Previous Article PERRICONE: Whose Power Is It To Reopen America?
Next Article WAGUESPACK: 2020 Vision Doesn’t Turn Out To Be What We Thought