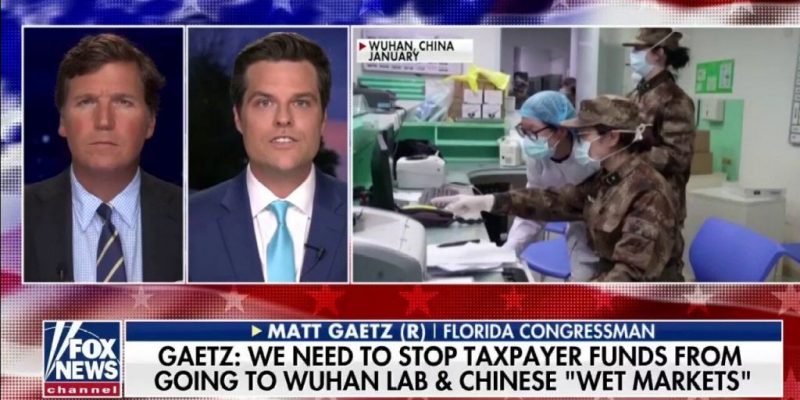 Rep. Gaetz says that the facility at the heart of the coronavirus outbreak, the Wuhan Institute for Virology, continues to benefit from a $3.7 million federal grant from the United States.

“The NIH [National Institutes of Health] gives a $3.7 million grant to the Wuhan Institute of Virology [and] they then advertise that they need coronavirus researchers and following that, coronavirus erupts in Wuhan.”

The Congressman shared his interview with the caption reading,

“For years, the US government has been funding cruel animal experiments at the Wuhan Institute of Virology, which may have contributed to the global spread of COVID-19 with virtually no US oversight. It has to end now.”

Congressman Gaetz is calling for the grant to be immediately suspended given the obvious saying,

Rep. Gaetz reminded viewers that “this is an active grant” and said he is calling upon Health & Human Services Secretary Alex Azar to immediately eliminate the grant which he says can be done “with the stroke of a pen.”

The Congressman justified his actions saying, “They have not been honest. And at worst, they’ve been negligent to the point of many, many deaths throughout the world.”

Gaetz even lends credibility to the growing possibility that the COVID-19 itself came from the lab explaining,

“The NIH gives this 3.7 million grant to the Wuhan Institute for Virology, they then advertise that they needed coronavirus researchers. Following that, coronavirus erupts in Wuhan…”

As Dr. Lance Wallnau pointed out yesterday, another breaking aspect of this story is that U.S. authorities warned about the unsafe environment of the biolab in question and other nearby facilities in 2018 but nothing appears to have been done.

See the interview for yourself below: