With all due respect to Secretary of State Kyle Ardoin, we’re going to have to drop the hammer on this horrendous idea of converting Louisiana’s elections into opportunities for the Democrats to practice ballot-harvesting and other fraud endemic in widespread mail-in ballots.

Gov. John Bel Edwards issued a proclamation yesterday moving Louisiana’s presidential primary election, which was scheduled to be held on June 20, to July 11. He’s also moving the July 25 municipal elections to August 15. That set in motion a proposal by Ardoin which would enable mail-in ballots in Louisiana, and a pair of left-wing Democrat state representatives from New Orleans, Aimee Freeman and Mandie Landry, are now proposing legislation which would encode mail-in voting into state law.

And here’s the sample application for a mail-in ballot… 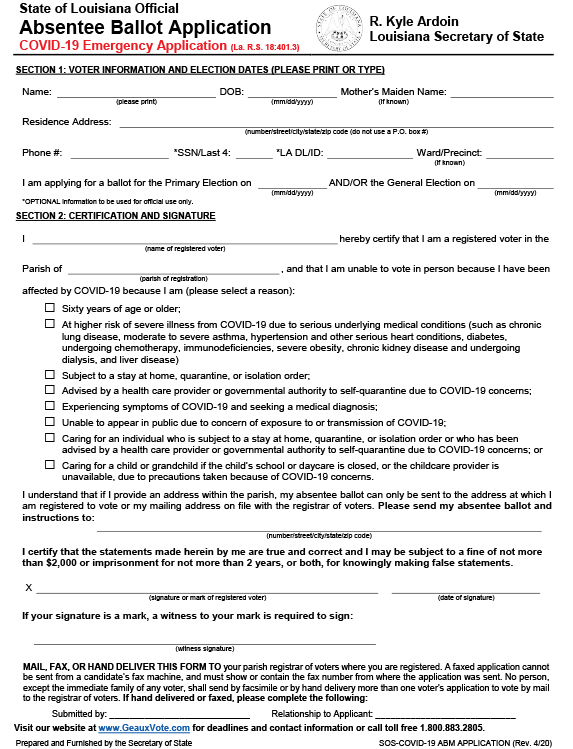 This goes in front of legislative committees today, with practically zero public input at all. It’s fairly obviously an end run around public scrutiny, which no Louisiana politician is entitled to. Sorry, but this state’s political history is what it is.

And yes, these two election dates are throwaway elections. Other than party positions, like local PEC’s and State Central Committee seats, the presidential primary is a wash – we already know it’s Trump vs. Biden in November, so the primaries are basically meaningless to the average voter. And the municipal elections are low-turnout affairs.

Why should you care?

Because this is the camel’s nose under the tent. This is how it starts. Now we’re going to expand voting by mail, despite the fact we know it’s a disaster. The Post Office loses mail all the time, including mail-in ballots. Just last week there was a complete mess in Wisconsin over that issue, and Wisconsin is a place with far less history of electoral shenanigans than Louisiana.

The Democrats nationally are pushing mail-in ballots. We know that everything the national Democrat Party does is intended to pollute our elections and make them less secure. That can’t even be argued at this point. They refuse to allow any efforts made at ballot security, they’re for election-day voter registration, which is an open invitation to fraud, they want to automatically register kids as young as 16 or 17 to vote, they’re all aboard for ballot harvesting…if there is a way to pollute an election, the national Democrats are for it.

Ardoin is just trying to help amid the Wuhan virus crisis. But this won’t help.

This is a classic case of “Never let a crisis go to waste.” This is about changing how Louisiana does its elections. There won’t be any great hue and cry over anything that might happen in July and August, because nobody will really care even if somebody manages to rig one of those races, and the “success” of those elections with the expanded mail-in ballots will be leveraged to institute this new regime permanently.

From a message going around, here is specifically what’s wrong with this proposal…

1. No reason for an additional week of early voting in a low turnout election. This Presidential Preference Primary will have a very low turnout, and there is absolutely no need for such expansion. Neither Democrat nor Republican primaries will feature a contest. There will be practically no political ads by either party promoting voting for their candidate in the Louisiana Primary. This assures a very low turnout and there is no reason to add an extra week to voting.

2. Extreme Expansion of Absentee by Mail Voting unnecessary and begging for fraud . Practically everyone in the state would qualify for the new criteria. Why expand it? Mail voting is ripe for fraud and might actually affect the outcome in a low turnout election.

3. Waiving the requirement for two witnesses is detrimental to Ballot Security. This absurd proposal should provide more ballot security, not less.

4. This proposal has been rushed through dramatically. Neither legislators nor the public have had time to review it. It is dated April 14. Few if any legislators have read through the proposal. Maybe we need to pass it first then read it.

5. Secret election Results. The proposal actually includes the possible delay of a statewide public announcement of the vote until for up to two weeks later! It seems outrageous. Often on election night we wait until the wee hours to receive the results from Orleans Parish. Now we might have to wait many days to find the results from any parish at all. When will the ballots stop coming in? Our nation has witnessed several elections decided by late ballots coming in. Magically, all were won by Democrats. This proposal should be defeated for this reason alone.

The answer here is a firm no.

The answer is to reopen Louisiana’s economy and go back to business as usual. Not to pervert the election process with the kind of stupidity other states have instituted, owing to a crisis mentality.