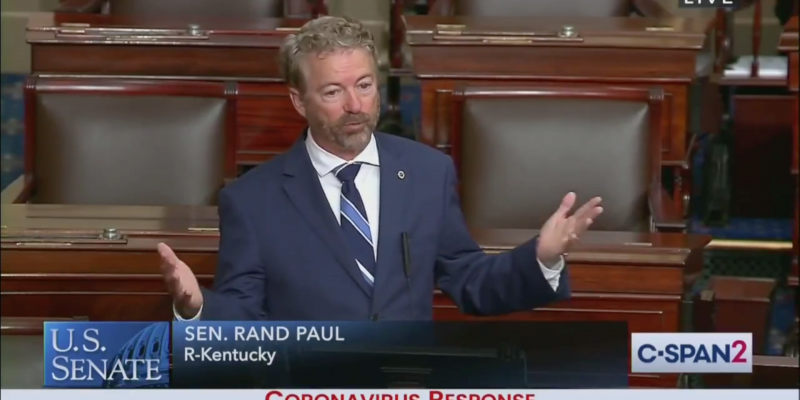 Sen. Rand Paul (R-KY) returned to work in the U.S. Senate on Tuesday for the first time since being diagnosed with COVID-19 several weeks ago.

Since fully recovering in early April, he has wasted no time in making his voice heard.

Upon his return to the Senate, Dr. Paul made an impassioned plea for reopening the U.S. economy and voiced his opposition to further federal spending to counteract the economic shutdown.

Paul spoke from the Senate floor saying that “the one choice to get America growing again” is “reopening American commerce.”

“So today I rise in opposition to spending $500 billion more. The virus bailouts have already cost more than $2 trillion! Our annual deficit this year will approach $4 trillion. We can’t continue on this course!”

No amount of bailout dollars will stimulate an economy that is being strangled by quarantine. It is not a lack of money that plagues us but a lack of commerce.

This economic calamity only resolves when we begin to re-open the economy. Opening the economy will require Americans to rise above partisanship, to understand that deaths from infectious disease will continue but that we cannot indefinitely quarantine.”

He concluded with an appeal to the spirit of America:

“My hope is that across the country there will remain a vibrant voice for limited government, for our constitutional republic. I don’t want to see this massive accumulation of debt destroy this great country.”

Watch Dr. Paul’s call to action for yourself below and then share your thoughts with us.

Senator Rand Paul was elected to represent the State of Kentucky as their Junior Senator in the 2010 midterm election. He was re-elected in 2016 for a second six year term. Born in Texas, he is the son of retired Republican Congressman Dr. Ron Paul.