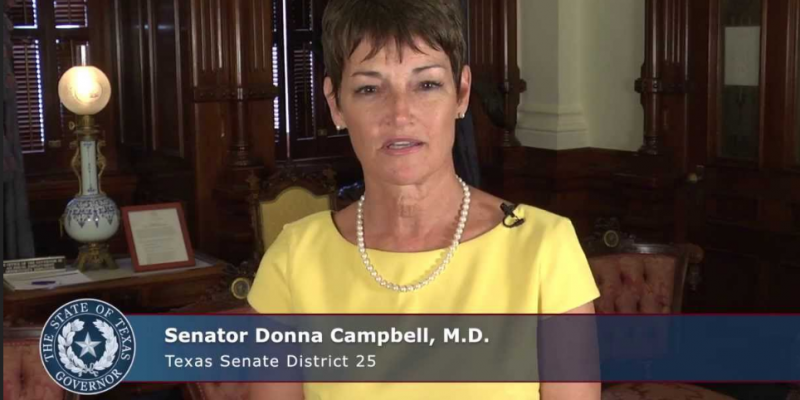 Two state legislators, who are also doctors, praised the Texas medical community’s ability to rapidly and efficiently respond to the coronavirus spread and the state’s testing mechanisms, although they also expressed concerns about reporting processes that they hope to address in the next legislative session.

Speaking on a panel hosted by the Texas Public Policy Foundation, the legislators highlighted problems with how hospitals are reporting coronavirus cases and the strings attached to federal incentives that are contributing to a wider problem.

Rep. Tom Oliverson, a practicing anesthesiologist and a partner in U.S. Anesthesia Partners in Houston, said based on what he has observed of the health care community in Houston and across Texas, “our health care system is the best in the world.”

“We need to stop and consider the effort put in by surgery centers and emergency rooms in terms of the number of discharges they performed, making sure we have adequate equipment, the huge ramp up of personnel, innovating in ways never thought of before, and preparations beyond preparations. We were abundantly prepared for massive pandemic that hasn’t materialized,” he added.

State Sen. Donna Campbell, a board certified emergency room physician in New Braunfels, said the state should reopen immediately and people need to get back to work.

Historically, quarantines are not for the healthy, but for the sick, she said. Keeping healthy people indoors raises concerns about potentially weakening healthy immune systems. People need to be outside, exercising, and following general hygiene practices they should be following all of the time even when there is no pandemic.

“We absolutely believe more people have contracted the disease who have not been tested which means the death rate is far lower than projected, which is a good thing,” Campbell stressed.

She added that if the majority of people are asymptomatic, testing people isn’t the best way to measure prevalence of the virus. A person could be tested on one day and have a different result on another day.

Currently there are two kinds of tests, a nasal swab and an antibody test.

Testing should be centralized, she suggested, in specific areas like jails, retirement homes, assisted living, and federal housing where people have tested positive and are more likely to spread the virus to someone else.

Texas has the third-highest number of recoveries from COVID-19 in the U.S. Gov. Greg Abbott announced Monday the stay-at-home order would end April 30 and the state would reopen May 1, with restrictions.

According to the State Department of Health Services, as of April 27, 25,297 confirmed COVID-19 cases have been reported, including 11,1170 recoveries and 663 deaths. The number of confirmed cases equates to .0008 percent of 29 million people, meaning 8 out of 10,000 people in Texas have tested positive.

In one month, nearly 1.7 million Texans filed for unemployment because of the stay-at-home order and coronavirus shutdown, more than double the number of those who filed in the entirety of 2019.

In response to the shutdown appearing to be disproportionate to the risk, David Balat, Director, Right on Healthcare at TPPF, told The Center Square, “The media frenzy was at a fever pitch. This was more political than science based unfortunately but there are certainly lessons that will need to be learned. As good as our healthcare system is in the U.S., it can be better still.”

The shutdown created worse consequences for patients who were unable to get injections, undergo routine surgeries, or make intra-office visits, Ballat added.

The CARES Act also provided an incentive to hospitals to misrepresent numbers, he explained. For every coronavirus-related death, hospitals received 20 percent more in funding.

“Death numbers are probably hyper-inflated,” Balat said. “The 20 percent reimbursement creates a reverse incentive for hospitals,” and “government solutions contribute to more of the problem.”

Campbell said she anticipated that the state legislature will look into this reporting practice next session.

To suggest that someone with preexisting conditions dies because of COVID-19 is a false way of reporting a cause of death, she said.

“Every dollar we get from the federal government has strings attached,” Campbell says, adding there is no such thing as free money.

“We’ve seen actions taken by local officials that go far beyond the pale,” Campbell said, adding that federal, state, city and county regulations imposed on citizens was far too much.

“This is a medical epidemiologic problem going on,” she added, “yet the people making the rules, the mayors, county judges … may surround themselves with people with medical knowledge but some of the regulations they put out there need to be reigned in.”

“Local control can be unconstitutional,” Oliverson said. “I never thought in my wildest dreams that I would have to wake up one day and have to worry that a police officer would go into a church and arrest people.”

Oliverson was referring to the Harris County order mandating that houses of worship not hold in-person services even though the governor’s order said they could and the Attorney General provided guidance on the matter. Several pastors sued over the order after one was issued a $1,000 citation for holding services.