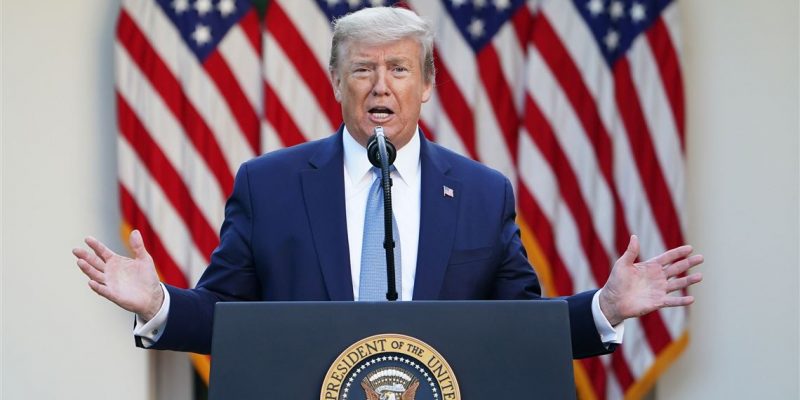 President Trump on Wednesday threatened to take unprecedented action to bypass Congress if they don’t reconvene to approve more than one hundred pending federal judicial appointments.

In his daily press briefing the President had an ‘ace up his sleeve’, arguing that it is within his constitutional authority to adjourn both chambers of Congress and saying he feels that it is his duty to do so during this national emergency.

All 50 states are under a state of emergency for the first time in American history, a scenario President Trump says calls for an all-hands-on-deck approach from American institutions including the federal court system.

“Perhaps it’s never been done before, nobody’s even sure if it has, but we’re going to do it,” President Trump declared.

The President accused congressional Democrats of playing politics with the justice system saying,

“There are currently 129 nominees stuck in the Senate because of partisan obstruction. Many are nominated for vacancies that must be filled to assist with the coronavirus crisis and the resulting economic challenges. The Senate has left Washington until at least May 4th, the Constitution provides a mechanism for the President to fill positions in such circumstances- the recess appointment it’s called…”

President Trump is referring to Article II, Section 3 of the Constitution which dictates that the President may “on extraordinary occasions, convene both Houses, or either of them, and in case of disagreement between them, with respect to the time of adjournment, he may adjourn them to such time as he shall think proper.”

“The Senate’s practice of gaveling into so-called “pro forma” sessions where no one is even there, has prevented me from utilizing the constitutional authority that we’re given under the recess provisions. The Senate should either fulfill its duty and vote on my nominees or it should formally adjourn so that I can make recess appointments. If the House will not agree to that adjournment, I will exercise my constitutional to adjourn both chambers of Congress. The current practice of leaving town while conducting phony, pro-forma sessions is a dereliction of duty that the American people cannot afford during this crisis. It is a scam what they do.”

See President Trump’s statement for yourself: