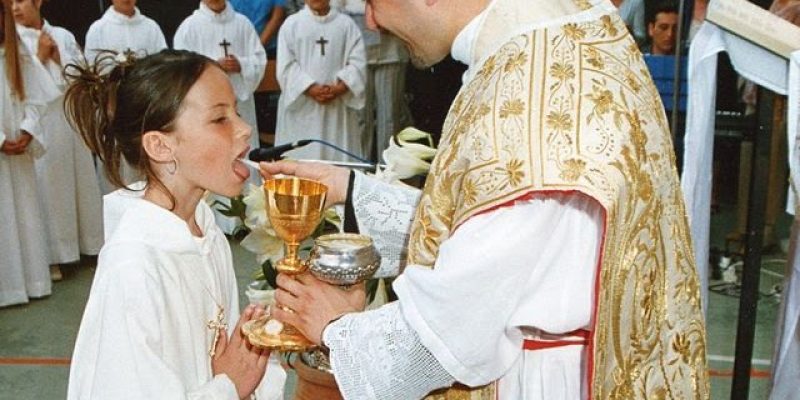 The state of Louisiana is made up largely of Roman Catholics. In the United States, it is the faith of millions and millions of Americans.

What happened this week is not some distant policy by a liberal executive that could never touch us Louisianans. If Americans have learned anything the last few months from monitoring our own governor’s actions, it should be that everywhere in the country can be considered “our own backyard.”

And now the central tenant of Catholicism is under attack from those shifting sands.

The central devotion of the Catholic faith is the consumption of the Eucharist, and that intrinsic practice is in serious danger. Per a release from Maryland’s Howard County Executive Calvin Ball, Order #2020-09 has determined public health rules under which churches—which the order delineates as “non-essential”—may reopen. The crucial one is the prohibition of the distribution and consumption of any food or drink.

This effectively eliminates Communion and the celebration of the Mass.

“Of any kind.” Did this really need to be stated so explicitly? It seems that since the consumption of Eucharist is the central point of the Mass, that this order is specifically discriminatory.

Howard County spokesman Scott Peterson told CNA in a statement that “Howard County has not fully implemented Phase 1 of Reopening. We continue to do an incremental rollout based on health and safety guidelines, analysis of data and metrics specific to Howard County and in consultation with our local Health Department.”

“With this said,” Peterson added, “we continue to get stakeholder feedback in order to fully reopen to Phase 1.”

The executive order also limits attendance at indoor worship spaces to a whopping ten people or fewer, strangles outdoor services to 250 socially-distanced people wearing masks (that are becoming more a symbol than anything), forbids the passing of collection baskets, and eliminates handshakes or any physical contact between individuals.

This, in direct conflict with the allowance of 50% capacity for non-worship establishments that do not host religious services.

This, despite increasing evidence that what we have been told for months concerning this has-been pandemic has been faulty, at best.

The Archdiocese of Baltimore announced its own phased opening plans this week as well. While some of the vision includes that found in the Howard County order, of course there is no prohibition on consumption of the Eucharist.

This civil executive order is one of the most recent abuses of local power. Per CNA:

The Department of Justice has recently issued a number of letters concerning cases of state and local public health orders which affect churches and houses of worship. In the last week, the department sent letters to the governors of California and Nevada, emphasizing the need to respect religious freedoms while working to combat the coronavirus pandemic.

The DOJ has also filed statements of interest in cases involving conflicts between churches and local authorities, including a lawsuit against the Mayor of Greenville, Mississippi, after members of the Temple Baptist Church were fined $500 for attending a service in their cars in the church’s parking lot. The mayor later rescinded the fines and amended the city’s stay at home order.

“Simply put, there is no pandemic exception to the U.S. Constitution and its Bill of Rights,” Eric S. Dreiband, head of the U.S. Department of Justice’s Civil Rights Division, said in a May 19 letter to California Governor Gavin Newsom.

Where would Louisiana fall in that number? If you are Catholic, are you willing to let it get that far?

All of this is continuing, even as this has-been pandemic continues to fizzle out, even as the CDCs and Faucis of the world come out and say that things like masks and social distancing have perhaps run their course, at least to the extent they’ve been in place, and that serious, catastrophic mistakes have been made for months now as they’ve house arrested an entire nation into submission.

No one is immune to this mass abuse of power. No one is safe. It is why we have to continue to fight back, to take off the masks, and damnit to shake people’s hands and give that oh-so-shameful hug in public.